Turning the Heat: An Interview with Jeffrey Moelis 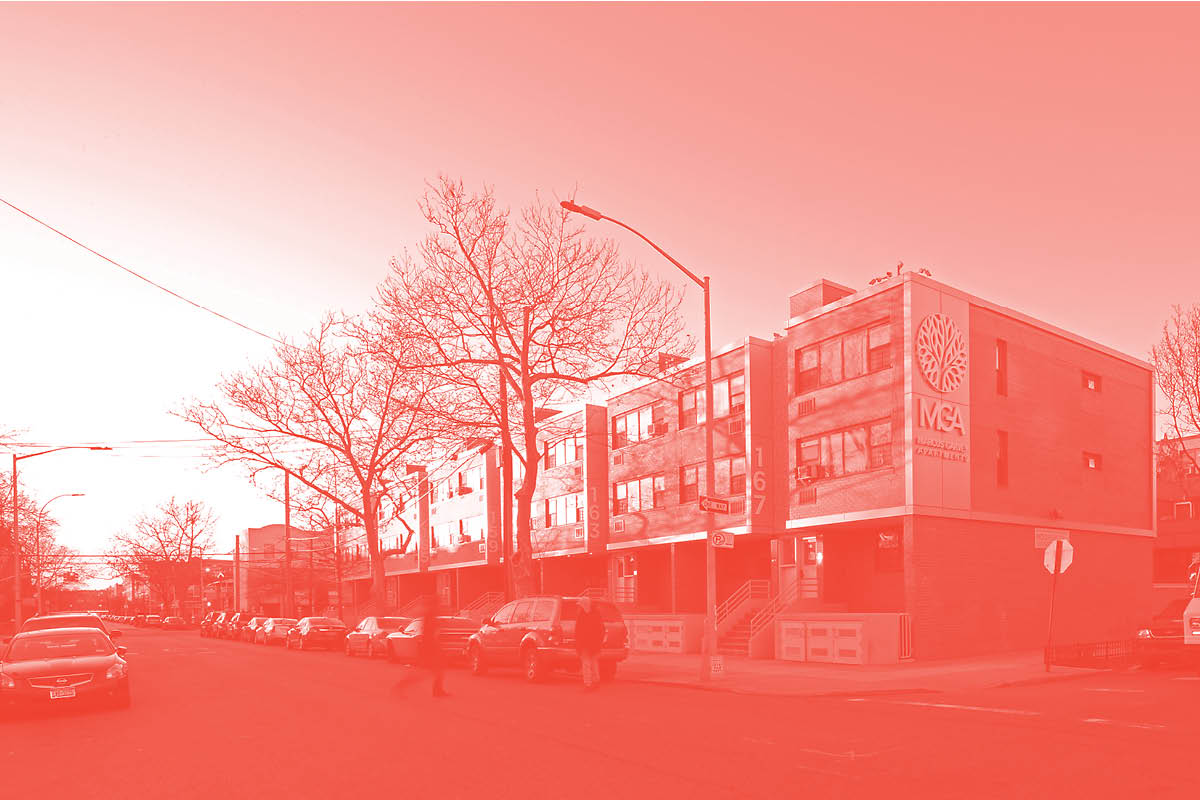 Mallory Taub: Could you tell us how your work addresses equitable low carbon building design?

Jeffrey Moelis: As a firm, we recognized, like most sane people have, that climate change is real, and we need to do our part to lower our carbon footprint. For the past decade, we have gotten better at designing more energy efficient buildings and trying to use renewable sources. We’ve used wind turbines, solar in a number of buildings, and built a microgrid at one of our properties, Marcus Garvey Apartments. In Harlem, we are now constructing the city’s largest residential affordable housing development ever built to Passive House standards. As a firm, it’s really important to us.

We are long-term owners, we are developers, and we’re our own general contractor.We are willing to put in a few extra dollars on the front end with the expectation that we’re going to see some cost savings down the road. I think a lot of the policies that the city is implementing tend to be more of a stick rather than a carrot. I was speaking to someone recently and they were surprised that our numbers are a little bit higher than they thought. Part of it is that we are designing for the future of Local Law 97 so that we don’t end up in a position 15 years from now where we’re paying large fines because our buildings are carbon intensive.

And as for myself, my particular expertise within L+M is related to acquisitions and rehabilitations. It’s important to the city to try to make older buildings more efficient. It’s quite challenging, but we do whatever we can to upgrade and change the infrastructure and to make it more energy efficient for the future. A lot of it also has to do with air quality. Bringing in fresh air and better air quality really has made a difference. I think some of our residents don’t know why things feel better, but they do feel better.

MT: Are there certain policies that would help incentivize low carbon retrofits that keep buildings affordable?

JM: Yes, there are some NYSERDA funds out there, but I think it’s just the tip of the iceberg. These things do cost more money. If you’re buying an existing building to renovate, after you get over the initial construction costs, and you start making repairs, there’s not a lot in your budget to do extra work to make the building more energy efficient. Being able to tap into some subsidy or low-cost loans at the city or state level would really help.

New Jersey has some really great incentive programs for solar right now that are better than New York City. It’s also incumbent upon the government to look to other government agencies or other places to see what’s working better.

We have found that even with building to Passive House standards, lender underwriting is not keeping pace with the savings.

MT: What are the challenges in prioritizing both equity and carbon in the built environment?

JM: Even on new construction, there are definitely systems that are more expensive than others. The premium to build something to Passive House standards is somewhere between five and ten percent. That could be the difference between making a profit and not. At the end of the day, there’s a budget. Where do you find the money to do it? At some point in time, someone’s going to build market rate housing to Passive House standards and get premium rents because people want to live in it because of their values, the better air quality, and the lower utility bills. That market-driven dynamic doesn’t exist on the affordable side.

HPD has their term sheet with subsidy levels and you’re trying to always fit into that. A lot of times, with the additional costs to build to Passive House standards, you need additional subsidy beyond what the city is willing to allocate. It’s not always the case, but it makes it harder and you’re cobbling together more sources of funds. I think less sophisticated developers are going to struggle.

MT: Is there a mixed-income scenario that could make building a multifamily development to Passive House standards more appealing financially?

JM: I think you can do mixed income, and even some of the affordable Passive House developments have higher tiers of incomes so the rents are higher. There are developers that are willing to put more equity in a deal knowing that there’ll be more cash flow down the road. We’re willing to do that and put up more cash, or we’ll defer more of our fee because we know that we’re going to get operational savings when we build to Passive House standards. I’m just not sure everyone will do that, but if you take the cost side and rent everything at 60% of AMI and below, it’s going to be really difficult. If you have a tiered mixed income, where you’ve got between 40% and 120% of an AMI, it’s easier to make those work even if you can’t get a premium rent because your rents are restricted. It’s going to be interesting to see if market rate developers start moving down the path of building to Passive House standards.

It’s going to be interesting to see if market rate developers start moving down the path of building to Passive House standards.

MT: Our team has been studying the case for upzoning a neighborhood like Soho/Noho, where the strength of the market may be an opportunity for sustainable mixed-income housing development. Do you think upzoning can be a useful tool to expand the number of low carbon affordable units?

I think your hypothesis is correct. If you’re in a neighborhood like that, while land prices would go up with a rezoning, you would probably be able to support more sustainable building with affordability in it through market rents.

But we’ve been beat up a lot on zoning and upzoning, so I’m probably not the most optimistic person at any sort of rezoning that will happen in those neighborhoods. If you look at recent history with rezonings around the city, with few exceptions, they just keep getting shut down. No one seems to want more density in their neighborhood..

For example, at Marcus Garvey Apartments, we were developing seven vacant lots. This is a transit oriented, all affordable development, which was a perfect story for the Mayor’s housing plan. We came in with a plan to build seven buildings between 10 and 12 stories, and received pushback from the community and ended up having buildings between five and seven stories, with lots of setbacks and parking requirements. We ended up building about half the amount of affordable housing we could have. While there is general agreement in the city for the need to increase the amount of quality affordable housing, there’s a movement at the local level to not allow density and tall buildings.

MT: If you could wave a magic wand and have all of those barriers and current zoning restrictions go away, in what parts of New York City would you dream of building affordable and low carbon multifamily developments?

JM: I think you would want to do it everywhere. Ideally, you get away from putting it all in the same neighborhood—there’s fear of gentrification in lower income neighborhoods and some of that is well-founded. You don’t really want to concentrate your low-income housing in those neighborhoods.

I would say I’d want to focus on the island of Manhattan. I live on the Upper West Side—why couldn’t they make it such that if you want an additional floor area bonus, you had to put in 20% affordable? Also, I’d want to focus where there are good schools. We tend to build affordable housing in neighborhoods with low performing and underfunded schools.

Why shouldn’t a low income family live in my neighborhood and go to the good public schools in TriBeCa or the Upper East Side?

MT: One idea you mentioned was giving FAR bonuses for increasing the number of affordable units in the development. Do you think it would be possible to require a certain carbon performance to get this policy incentive that drives both carbon and affordability goals?

JM: At the end of the day, I guess it’s not just FAR, it’s also height restrictions. If you give a developer a bonus to build more and build higher, those upper apartments are worth a lot more money, so they’re making more money. Forcing them to meet some sort of sustainability metrics, as well as affordability, would seem like a no brainer. Think about all the value that the city creates for land owners when they built the Highline or the Second Avenue subway. There is enormous value created, but it’s not always captured. If you make it such that the incentive is worth it, then they’ll do it.

Maybe there are other things too, like common community benefit money that goes to help out a local public school or fix a park. There are a lot of things you can do, but I think some municipalities have gone overboard with some of these requirements. There needs to be a balance as you run the risk that the requirements make it infeasible to build.

MT: How do you feel about neighborhoods being able to create carbon performance requirements for buildings that developers would have to adhere to in order to construct a building in that area?

JM: Conceptually it is a good idea but I fear that neighborhoods that don’t want any new development will put in incredibly stringent requirements, so no one will build anything new.

In my mind, a lot of it has to be market driven too. Mandating things and putting in strict requirements sometimes has unintended consequences. By creating incentives and giving people bonuses for doing certain things, you’ll get more creative developers and more people probably latching on than you would otherwise. That’s what I would encourage our policymakers to think about.

Jeffrey Moelis began his career with L+M twelve years ago when he co-founded C+C Apartment Management, the management affiliate of L+M. Currently, he leads L+M’s preservation efforts throughout New York, New Jersey and California. Jeffrey has had a role in all L+M’s preservation transactions which includes the acquisition and rehabilitation of nearly 8,300 units totaling $2.3 billion in development cost. Before his career as a private equity investor, Jeffrey worked at a non-profit community development group based in Oakland, California, where he served as the senior project manager for the $100 million Fruitvale BART Transit Village. Jeffrey has a BA in Finance from the University of Massachusetts, Amherst, and an MBA from the University of California, Berkeley.