Shelter for All: An Interview with Rita Zimmer 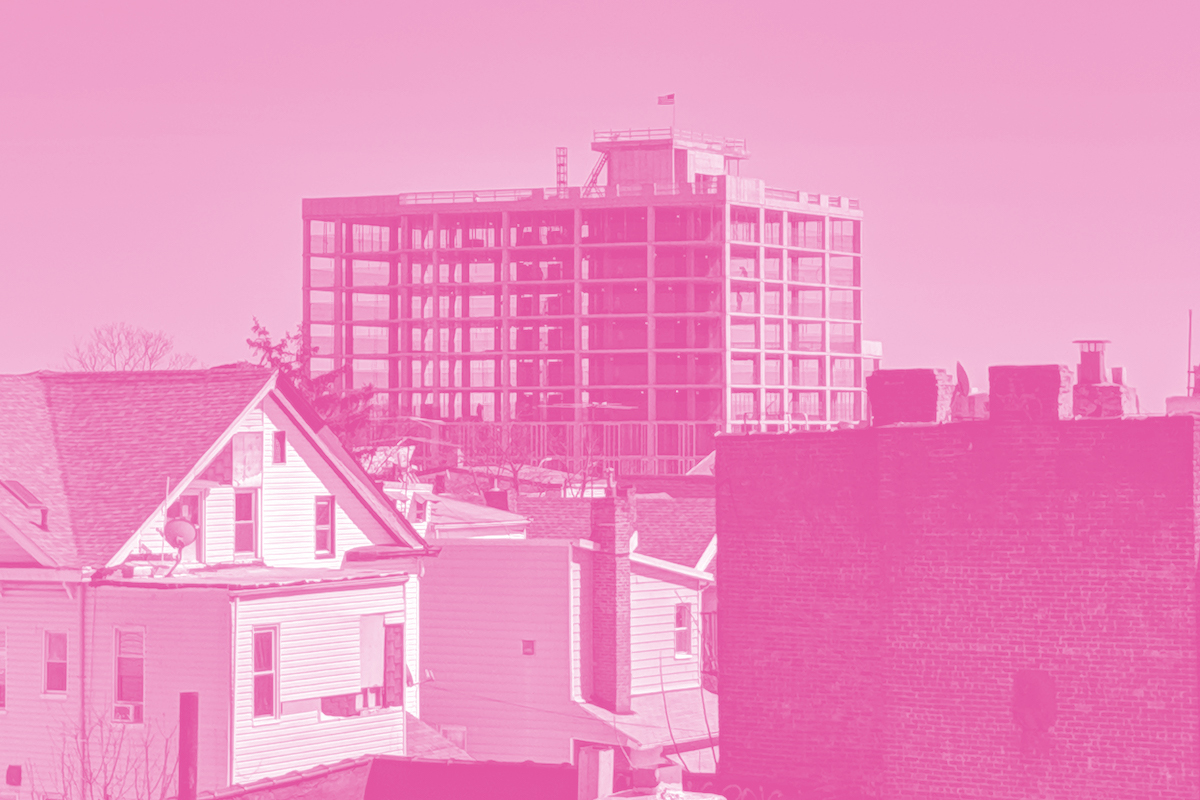 The Urban Design Forum’s 2018 Forefront Fellowship, Shelter for All, addressed the homelessness crisis in New York City by examining how to dignify the shelter system through better design and exploring the root causes of homelessness and housing precarity. Fellows developed original design and policy proposals on how to address the prison-to-shelter pipeline, public bathrooms, public realm management, supportive housing, and racist housing policies, which we are pleased to publish alongside interviews with leading experts.

The following interview with Rita Zimmer, Executive Director of HousingPlus, accompanies Breaking Free: Preventing the Prison-to-Shelter Pipeline. Read the full set of Shelter for All proposals and interviews here.

Heli Pinillos: When HousingPlus was founded 17 years ago, it opened its doors to six families and six single women who had been incarcerated and homeless. Today HousingPlus houses more than 250 women and families, with a uniquely holistic approach helps women facing homelessness build lives of their own. Rita, how did you decide to start HousingPlus? What drove you?

Rita Zimmer: I saw a need. I started with the person whose needs are not being met, in this case, a woman, or a woman and her children. I talked to people and understood better their needs. I was doing some volunteering work at state prisons in Westchester County. If you talk to the women and ask them what they needed, most will say housing, jobs, better services, and help reconnecting with their families and children.

I had already done quite a bit of housing work. I started another organization called ‘Women in Need’ back in the eighties, so I had some experience with how to do housing throughout almost 20 years. We did new construction and we did shelters, so you learn how to put the package together. But if you provide housing and you don’t provide the support services to help them, they’re going to end up back in that pipeline that leads them back to prison or jail. If you look at the population who are in jail and the population who are homeless you find a lot of similarities. They are poor, lack good healthcare, lack a good education, and they end up taking a different path from others that leads to alcohol, drugs, and depression.

You can’t just do housing; I mean housing is the foundation but you also need to provide support. And if you ask the question of why? I never thought so much about it, I just did it.

HP: From Women in Need to volunteering at a correctional facility and now HousingPlus, did reentry services always exist?

The Osborne Association and Fortune Society are among the oldest organizations doing reentry work. The Osborne Association is named after Thomas Mott Osborne, who was probably one of the first wardens in New York State in the early 1910s. He accepted the job on the condition that he would be allowed to live in prison undercover in order to learn what the inmates’ needs were. Most individuals had alcohol problems; some were mentally ill; others depressed or poor. He realized that if people didn’t get support once they were out of prison, they could end up going back in again. Through his family, this eventually led to the creation of the Osborne Association. They started all these outreach programs and now they are a big organization helping thousands of men.

Similar story with a man named David Rothenberg in the late 60s. He was a producer on Broadway, who through research at Rikers for one of his plays ended up meeting some people and decided to found the Fortune Society. They now provide housing and services to many formerly incarcerated individuals.

RZ: Parole is not in the housing business but there is public policy. If you don’t change the rules of who can get into housing, and the only way for formerly incarcerated individuals is to go through the shelter system, then there is a problem. 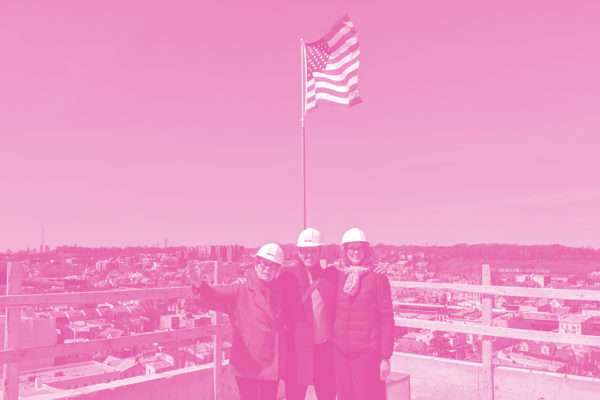 Rita Zimmer with Forefront Fellows at Linwood Park Apartments, an affordable housing development in East New York, while under construction.

There is a pilot program through HPD that offers Section 8 vouchers from HUD to people in reentry. They don’t have to be in the shelter system. That’s a breakthrough because you have to be chronically homeless to get this voucher. Usually, you are not considered homeless if you come from jail or prison. Now these vouchers can go to people who are coming out of jail or prison, people who need treatment. This is the type of program you need because once you come home without going through the shelter, and instead go through a transitional program with access to housing, you break that pipeline.

The logistical part is difficult. Prisons don’t have the staff for this and parole would rather send people to the shelter system than send them to one of our programs. Parole has so much control. They have a lot of rules and monitoring, a type of control that doesn’t really help individuals get a job but instead punishes someone if they break the rules and sends them back to Rikers. Parole have a lot of power.

HP: What are the challenges for women? Are the needs different for women than men?

RZ: They can require different types of housing if they are with their kids. They would need an apartment as opposed to a room or studio. Especially as parents, they should receive mental-health services to overcome the trauma of having been incarcerated. Not to say that men are not traumatized, but women need a lot of support, especially when it comes to reuniting with their children.

In this particular building, we have six women who came out of prison and all have been reunited with their kids. Four out the six are still with us today. Sometimes when these women go to work, the children will be afraid if the mother returns home late. It takes a long time to build that trust back and to guarantee something is not going to happen again. The children may still be angry. Or the children may have already become self-sufficient or accustomed to living with other family, and now that the mother is back, she can’t afford to buy the same things that the other family members could.

The mothers feel shame, remorse, fearful, and the stigma of having been in prison. These are significant things. Society has a higher expectation for women. People don’t understand that if someone has an addiction or mental health problem, it is not always the person choosing. Also, women commit different types of crimes than men. They are less likely to do violent crimes. Sometimes women need diapers or clothes and they end up stealing to take care of their kids.

HP: Talking about kids and that period when their parents are away in prison, do the children and other family members get access to reentry services?

RZ: The Osborne Association does a lot of reentry for families. They have a whole unit and do a lot of video visiting. The family goes to a studio, which is set up like a living room, and the parent goes to a special room at the correctional facility. They can spend approximately 30 minutes catching up over video conference. For on-site meetings, there is a bi-weekly visiting program that takes the family to the prison. There is also a trailer that women can use to spend the weekend with their family, but you need to earn that privilege. The truth is that a lot of mothers don’t want their kids to come to prison. Having to go through security is so painful for everybody. People who have long sentences need to break through that and accept it, but others who have short sentences would rather tell their kids they are going away for school or the military.

HP: We would like to propose scaling up the use of technology, making virtual meetings accessible to inmates as a way to reconnect parents with their family. Do you see that as helpful?

RZ: It always helps. Some families do want those services, and maybe it does help maintain a good relationship with the person in jail or prison.

An interesting fact is that men get more visitors than women do, so reentry for women can be more difficult because people don’t visit them. If you go to Rikers Island and get on the bus on a Friday or Saturday, there will be mostly women visiting their boyfriends, husbands, brothers, or fathers. There are few men on that bus visiting another woman. That tells you how women are viewed by others including their family.

The reconnecting can be very important for both sides because there are programs where caseworkers work very hard to encourage their clients to reconnect but there can be resistance from the family. There are many cases where the parents haven’t been together for a long time and they need to work on rebuilding that relationship. It is hard because there is mistrust and resentment. These family dynamics are very hard, even in the best families.

HP: To end, what does it mean to end homelessness?

RZ: You need housing, housing that is safe and affordable. That’s what they need and Linwood Park Apartments it’s a good example of that.

Rita Zimmer has a long history of working to create opportunities for women in New York City. She is Executive Director of HousingPlus and Executive Director of the Women’s Community Justice Project. She founded Women in Need in 1983, volunteered at Taconic and Beacon Correctional Facilities, and helped create the nonprofit Women’s Community Justice Association. She holds a Master’s in Public Health from New York University. Rita wants to reimagine justice, dignity, and safety for women.