Roadways: How Did We Get Here? 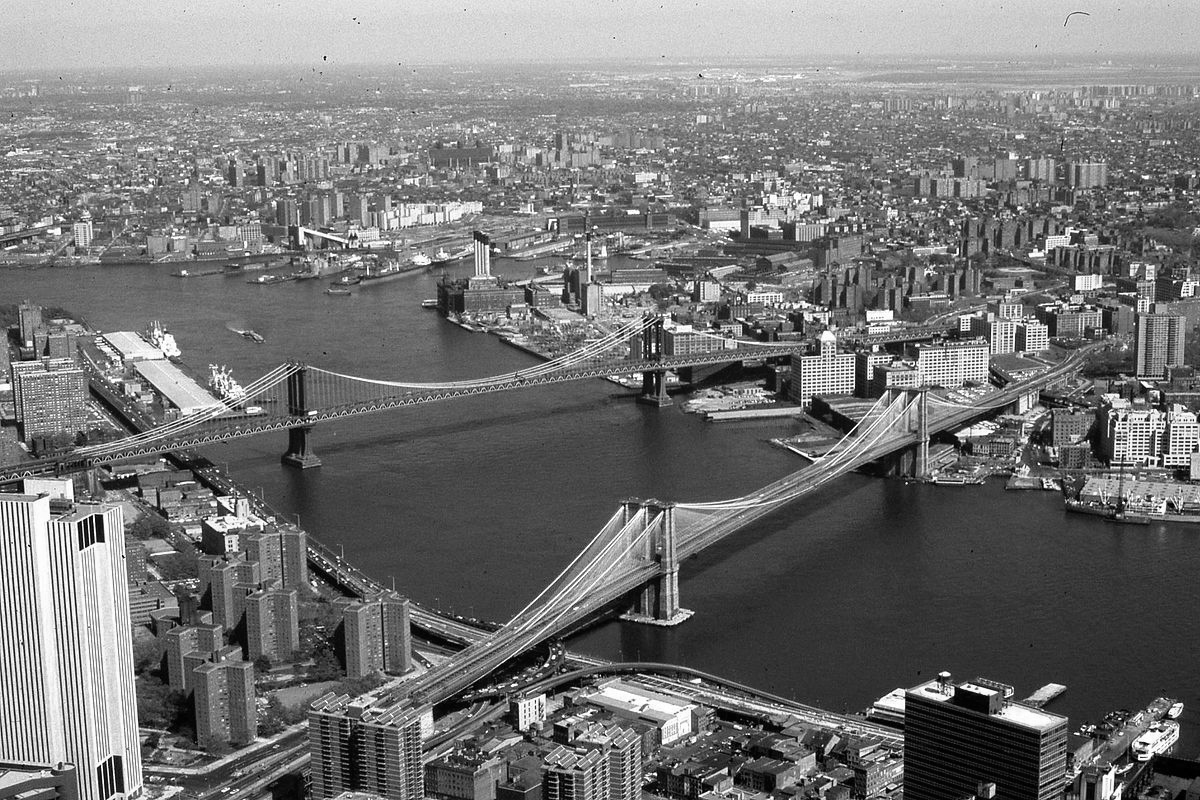 Samuel I. Schwartz came to be known as “Gridlock Sam” while serving as NYC Traffic Commissioner. Since then Schwartz has continued to apply himself to the city’s transportation challenges; first at the Department of Transportation (DOT), and later at the eponymous firm he founded in 1995. In the early 1990s, Schwartz outlined several strategies for better maintaining the city’s bridges in op-eds for the New York Times. Here, he reminds us of the lessons of the preceding decade—a decade of bridge crises—that he contended with during his tenure as DOT’s Chief Engineer.

In 1989, Dr. Benjamin Bernstein, a Brooklyn dentist, became the fifteenth person in the Tri-state region to die in a bridge collapse during the 1980s. Bernstein was crushed when a 600-pound slab from the FDR Drive viaduct fell on his car at 20th Street. A few days later, Ross Sandler, the City’s transportation commissioner, returned from a shiva call at the home of Dr. Bernstein. He relayed to me a conversation he had with the victim’s brother, who said with Talmudic inflection, “There is a message here.” Ross asked what the message was. “Fix the bridges,” was the reply.

We did fix the bridges of New York City. Unfortunately, it took several tragedies and crises to get the funding needed. The FDR collapse was the last in a string of disasters that decade, which began with a 1981 cable-snap on the Brooklyn Bridge that killed a well-known Japanese photographer. Despite those accidents, there were far scarier moments for me as the DOT’s chief engineer—where I faced catastrophic loss of life.

I was the chief engineer who closed the Williamsburg Bridge—all eight car and truck lanes; banning trains, and even pedestrians—because of massive corrosion and multiple cracks in the steel supports.1 Almost simultaneously, we had to ban two subway lines and vehicles from the north side of the Manhattan Bridge because, mathematically, comparing the bridge’s vehicle loads to its strength, it shouldn’t have been standing. I never told the public how close we came to a collapse with massive casualties. The combined closings of the Williamsburg Bridge and half the Manhattan Bridge, along with lane closings on the Brooklyn and Queensboro bridges, make L-pocalypse look like a minor detour.

As the decade ended, we finally got a boost in resources largely from City funds. From a handful of bridge inspectors, we jumped to over thirty. Maintainers (painters, cleaners, oilers of moveable parts, iron workers et al.) increased twenty-fold. Our capital program grew significantly. How did we know those were the right numbers of people and resources?

We commissioned a study by the region’s engineering schools to determine best practices and optimum levels of maintenance and capital replacement. The key finding: had we done the job correctly all along we would have saved lives and–surprisingly to some–money. The study showed maintaining the bridges properly would cost a third as much as doing it the way we had.2 This doesn’t count loss of life, the lawsuits, economic harm, and lost time from closed bridges.

This is explained in the graph, which I call “The Answer to Life.” The y-axis is annual dollars spent on capital replacement and maintenance for the city’s bridges. The x-axis is maintenance levels as a percentage in descending order from ideal maintenance (100 percent) all the way to zero—no preventive maintenance. As you can see, as you reduce maintenance spending the capital replacement costs grow at a much faster rate. I call it the “Answer to Life” because of its universal application: if you invest now, you need not spend as much later. One of the many examples that I use to show the universality of this curve is “invest in children and save on jails later.” 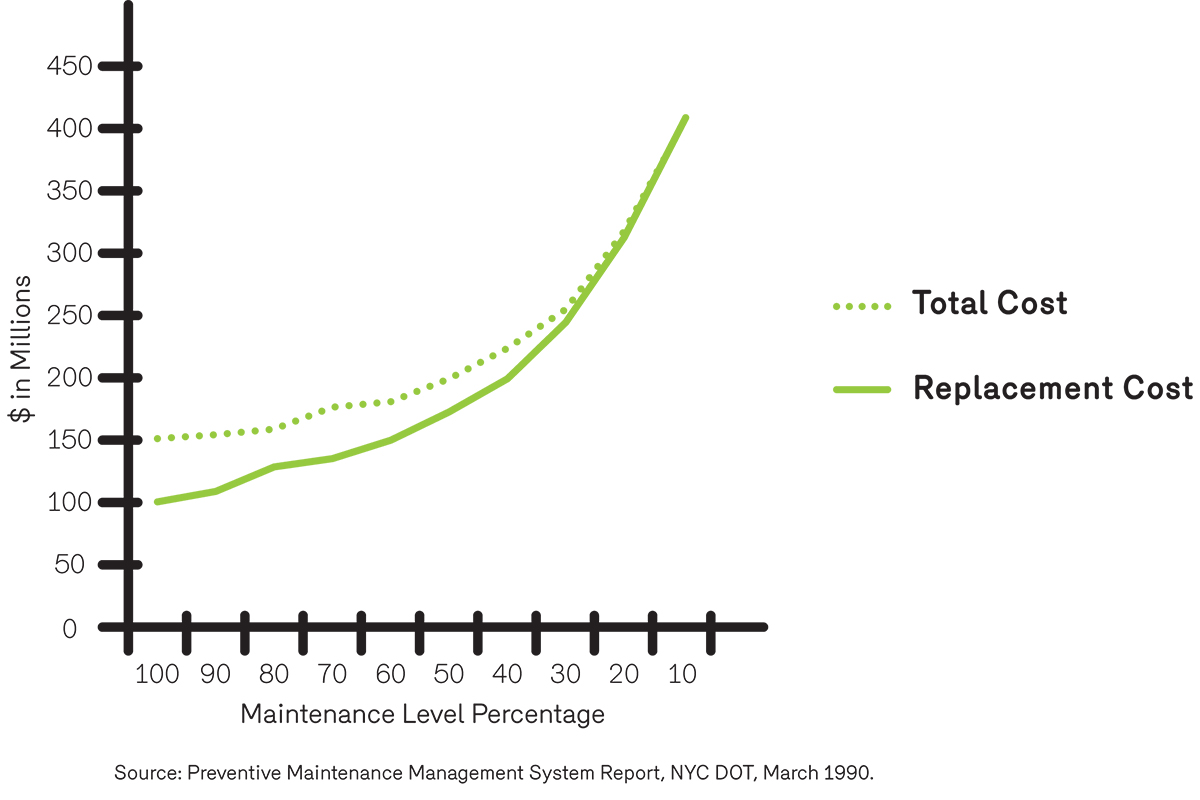 I’m afraid the lessons learned the hard way 30 years ago have been forgotten. The derailments at Penn Station, the subway signal failures, the stalled trains—all are signs of insufficient maintenance. I can almost hear Bernstein’s message, “Fix the trains.”

When Governor Cuomo announced the Genius Challenge for how to fix the subway I felt like writing in, “Just do preventive maintenance.” The formula for keeping infrastructure in excellent condition is not rocket science. Various elements need preventive maintenance on a regular schedule. And even with the best of maintenance many parts of a system have a limited life, so there needs to be a capital replacement cycle. An inspection program is key to spotting potential problems before they become costly repairs, or worse—catastrophes.

For example, subway cars need to be serviced, inspected, and maintained on regular cycles. A well-maintained subway car system will suffer breakdowns perhaps every 200,000+ miles. The MTA nearly achieved this in 2005, with the mean distance between failures 178,000 miles. By 2016, this value had dropped to 112,000 miles. Why the variance? Simply a reduction in the ingredients I listed: maintenance, capital replacement of parts, and inspections.

While the MTA’s NYC Subway Action Plan is a good first step and focuses on maintenance, the long-term funding remains unclear. The Port Authority and Triborough Bridge and Tunnel Authority escaped the travails the City had with its bridges because there is a steady funding stream via tolls on all of the two authorities’ fifteen bridges and tunnels. Our subways need a reliable funding source on top of current revenues. That is why I have long called for a smart congestion pricing3 plan called MOVE NY that lowers tolls where subways are not an option and charges drivers for entering Manhattan’s Central Business District, where trains are plentiful. A steady funding stream of $1.5 billion would be provided annually for our subways, bridges and roadways. The only thing lacking is political courage.

1 A side note: one day while I was inspecting the work on the closed bridge Donald Trump marched halfway across the bridge and announced he could get the bridge open in four months; we got it open in 3½ months. Government workers can do spectacular work when challenged and given freedom.

2 The study found the ideal annual spend to keep the city’s 840 bridges in excellent condition was $150 million—$50 million for maintenance and $100 million for capital. But the city was spending $400 million annually and the bridges were in poor condition because maintenance levels were about a tenth of optimum.

3 At the time of publication, a plan to implement congestion pricing was under consideration by the New York State Legislature.