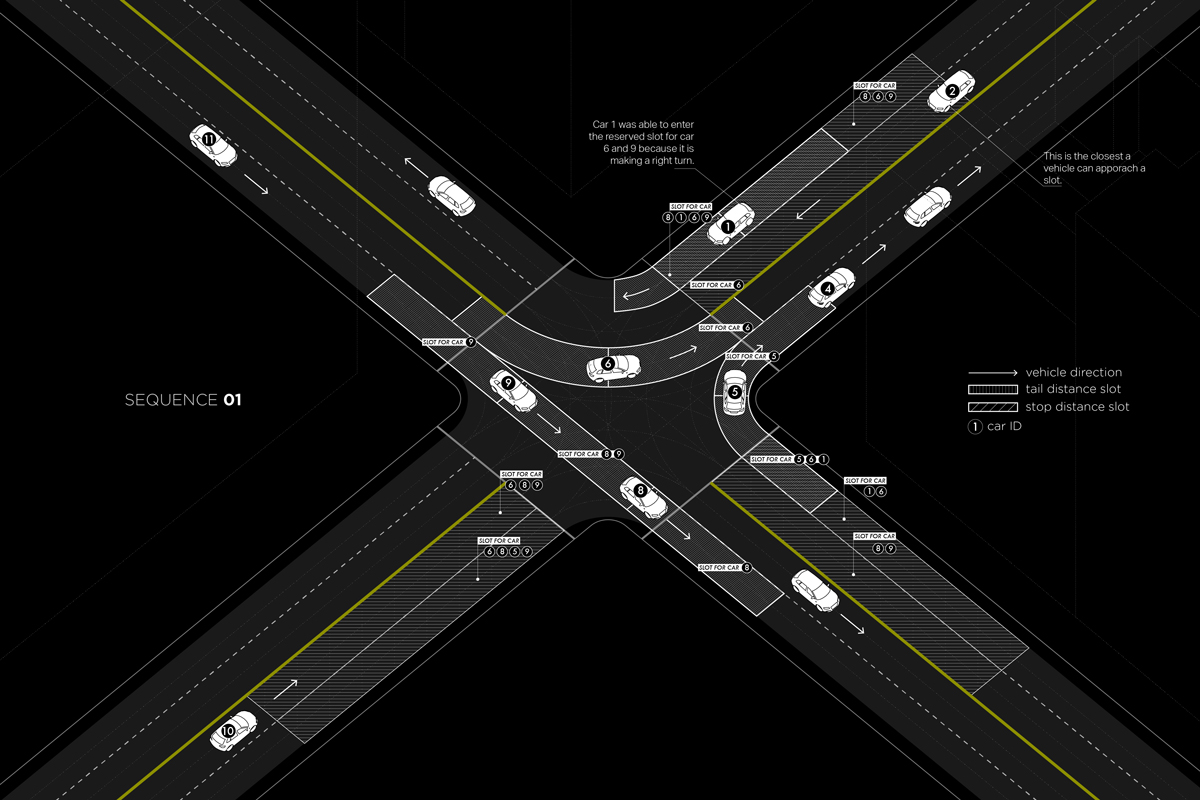 Intersections are a key component of any road system—there are more than 4,000 in Manhattan alone—and each is a common space shared by all forms of traffic. Effective intersection management is a prerequisite for taming congestion, yet today’s ‘state-of-the-art’ technology—the well-known traffic light—and its operational principle of managing traffic in terms of ‘flows’, have not changed in over 150 years. As emerging autonomous driving technologies transform our vehicles, we will need to fundamentally reconfigure our traffic management system—from the scale of the intersection to the entire city—to cope with them. Today’s inefficient traffic lights will struggle to survive. 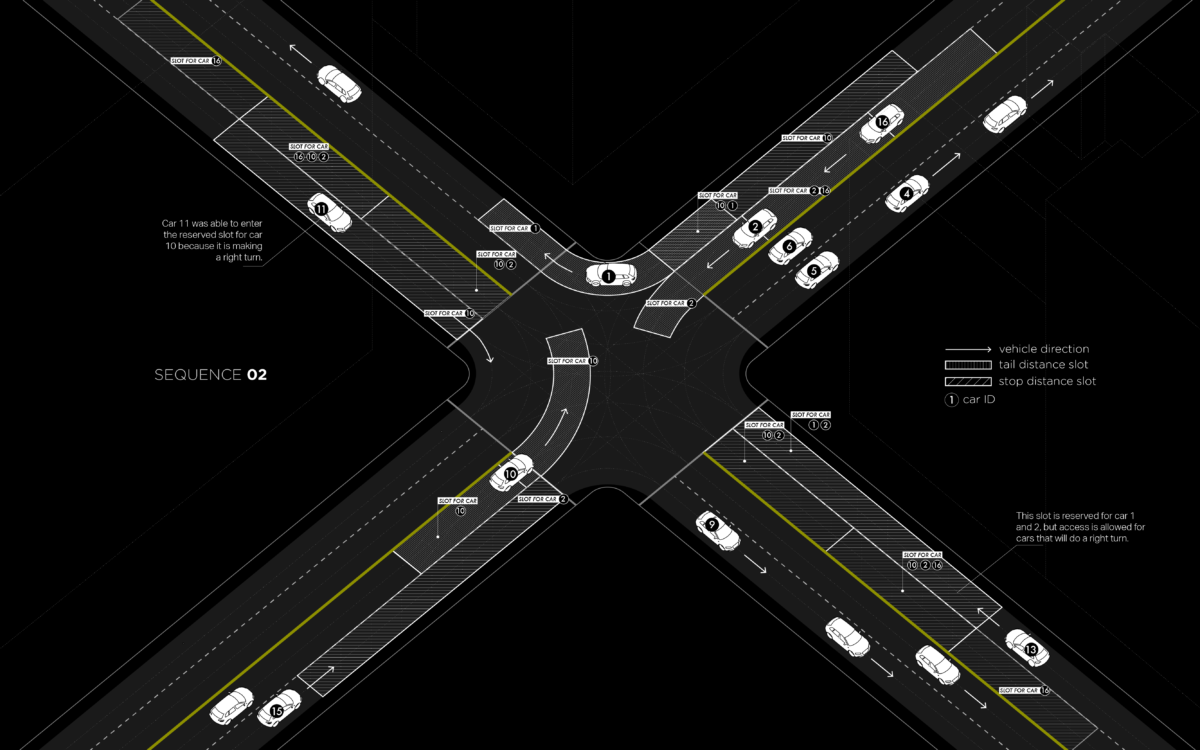 Slot-based intersections could replace traditional traffic lights, significantly reducing queues and delays. This sequential diagram describes how the system reserves slots around the intersection to safely space the cars as they travel through. (MIT Senseable City Lab)

We propose LightTraffic: a concept that rethinks our intersections by challenging today’s model of grinding to a halt every time. Imagine a scenario where sensor-laden, self-driving vehicles pass through every intersection by communicating with each other, maintaining a safe distance at all times. Just as in the slot-based systems used for air-traffic control, our roads should break traffic management down to the level of the individual vehicle; granting each a personalized ‘green-light’ to safely cross an intersection in coordination with others approaching. LightTraffic could double the capacity of our current system, minimize travel delays, reduce emissions, abate traffic congestion, and eliminate queues without lowering current car volumes.

Traffic lights were originally conceived for horse carriages. We need to reinvent them for the age of autonomous vehicles.

The system could also be easily extended to incorporate other classes of traffic as well, allowing for the simultaneous management of private vehicles, taxis, buses, emergency vehicles, bikes and pedestrians. Although our study clearly shows a tradeoff between intersection efficiency and the variation of average speed of these different classes of traffic, this will prompt a debate for New York’s transportation authorities, urban planners, and citizens to gauge the relative benefits of integrating different types of traffic in the same road space. 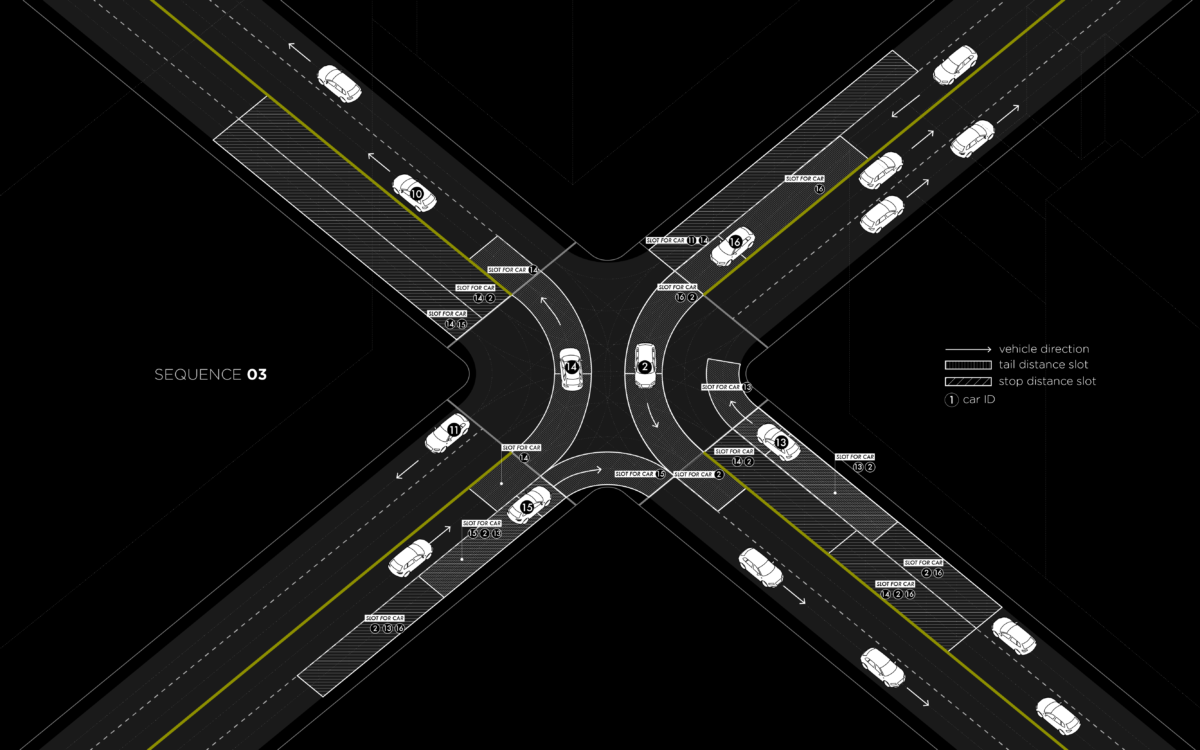 Slot-based intersections could replace traditional traffic lights, significantly reducing queues and delays. This sequential diagram describes how the system reserves slots around the intersection to safely space the cars as they travel through. (MIT Senseable City Lab)

Unlike todays traffic lights, that serve less than 65% of the City’s intersections, LightTraffic could easily be implemented across all our neighborhoods. The benefits of this software-based traffic management system could extend to our entire road network, reducing congestion and pollution everywhere from our wide avenues to the small streets of Lower Manhattan!

Paolo Santi is the Lead of the Ambient Mobility initiative at the MIT Senseable City Lab. He is also a Senior Researcher at the Institute of Informatics and Telematics of the Italian National Research Council.