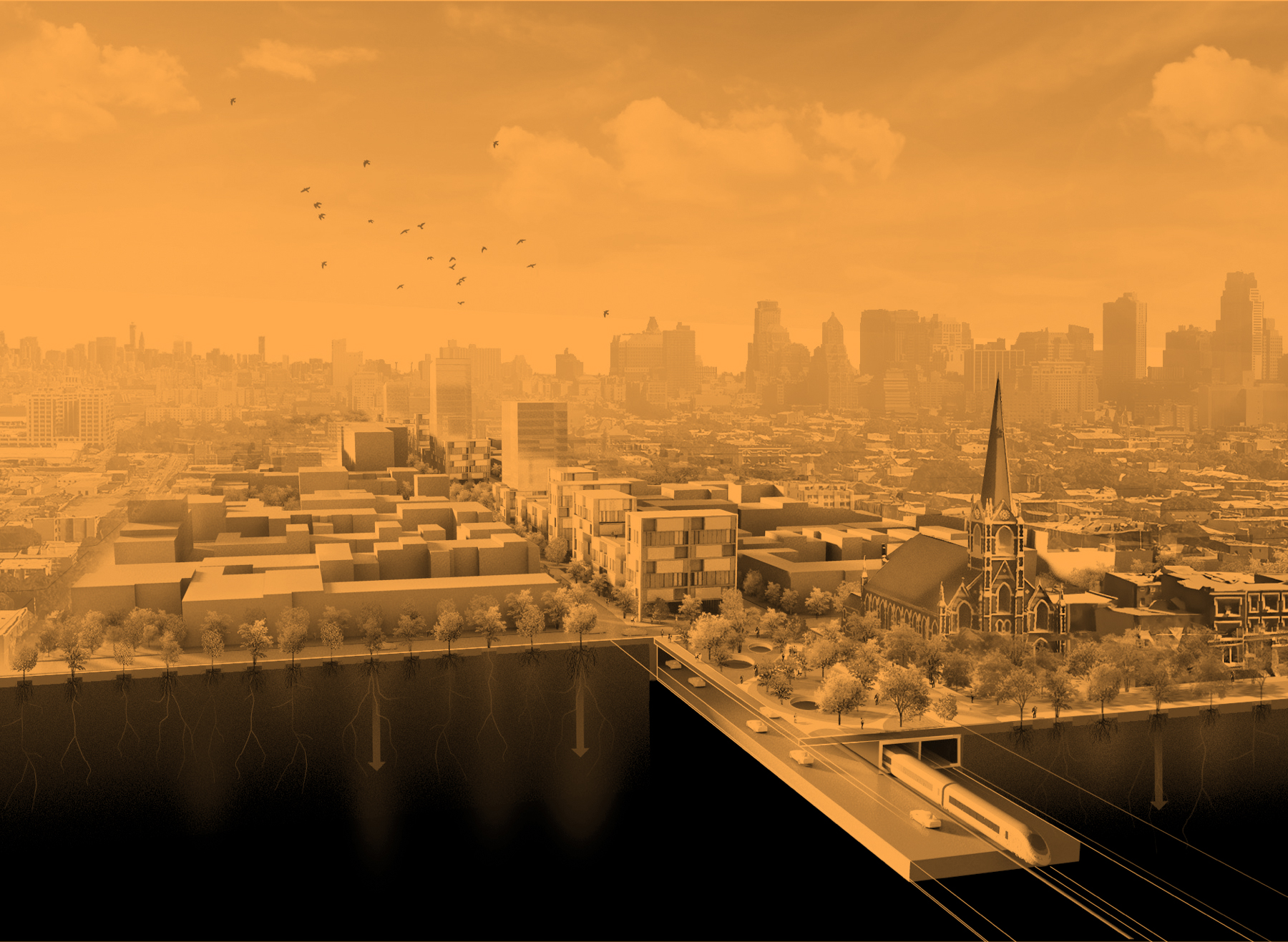 With the introduction of automated vehicles on the horizon, we have the chance to reclaim our roadways—unlocking space for green corridors, neighborhood connections, and new development.

In New York City, the road network covers approximately 25 percent of the city’s land area, and requires regular and expensive maintenance. However, the impending arrival of automated vehicles presents an opportunity to reduce road widths due to embedded technology. As automated vehicles can drive closer to one another, they require less road space than regular cars. If this is the case, portions of existing roadways could be recycled into other uses such as linear parks and infill development.

The Brooklyn-Queens Expressway (BQE) is a prime candidate for recycling the existing infrastructure to create a multifunctional system. The BQE is a critical connection for inter-borough traffic. It is one of the busiest road and bridge systems in the city, with 140,000-150,000 cars and trucks making daily trips. It is also one of the city’s most inhospitable roadways. Originally built in the 1940s under Robert Moses, the six-lane highway was flawed from the beginning, with short ramps, sharp curves, and a lack of shoulders. Today, its aging infrastructure needs serious repair. To kick-start the transformation of the BQE, we should:

Recycle Assets Hiding In Plain Sight
A roadway surplus could yield an area about half the size of Central Park; a windfall of approximately 400 acres that could become public space for cultural and community uses. Plant A Linear Forest
Half of the BQE (three lanes) could be deconstructed and planted as a green corridor, increasing park space and providing a safe conduit for pedestrians and bicycles. The corridor’s greenery would function as an air scrubber and water filter, offering environmental benefits to the neighborhoods that flank it.

Reduce The Viaduct
In portions where the highway is elevated, as in Williamsburg or Sunset Park, the viaduct could be trimmed to half its current width and replaced with at-grade boulevards, parks, and residential and commercial development. The remaining three-lane roadway could support autonomous electric vehicles that coexist with new buildings and community spaces.

Cap The Trench
Where there are portions of sunken highway, as in the Cobble Hill neighborhood, the BQE could be buried and augmented with new, fully automated transit. Above the highway, on a newly built deck, a mixture of residential development and new park space could knit together neighborhoods that have been divided for generations.

By recycling the massive automotive infrastructure that dominates the city, we could transform arterials like the BQE into smart and multifunctional systems. Such an automated expressway would create a more efficient and resilient transit corridor with fewer maintenance needs. Let’s prioritize people over cars, reclaiming some of our roadways to create greener, more connected neighborhoods.

Jennifer Pehr is an Associate and Senior Planner in SOM’s City Design Practice. With a background in urban planning and public health, Jennifer brings a unique perspective to her project work and understanding of how people interact with the built environment. She has extensive experience with large, complex, and mixed-use projects in the United States, Asia and sub-Saharan Africa. Jennifer has also worked as a researcher and educator, focusing on urban planning, international development and public health.