No School is an Island

Will a tech campus accomplish just what Philip Johnson and John Burgee’s 1969 plan could not—endow the island with an identity beyond a clever housing scheme and integrate it into the everyday lives of New Yorkers?

Edtior’s Note: The vision of the triumphant Cornell-Technion University plan is teeming with lofty ambitions: tens of thousands of jobs created, millions of square feet in shining, sloping facilities that will completely recoup the campus’s own energy use.

It’s certainly not the first time Roosevelt Island was planned with semi-utopian ambition. Will a tech campus accomplish just what Philip Johnson and John Burgee’s 1969 plan could not—endow the island with an identity beyond a clever housing scheme and integrate it into the everyday lives of New Yorkers?

For this month’s Roll Call, we sought out three contributors to capture the city’s newfound optimism and challenge the island to go further: Theodore Liebman, who helped develop the Johnson-Burgee plan from the ground up; Gina Pollara, who is currently at work finishing the final piece of the 70’s plan puzzle, a park and memorial designed by Louis I. Kahn; and Laxmi Ramasubramanian, who spearheaded a recent study to evaluate the needs of Roosevelt Islanders.  –DM

Gina Pollara was appointed as the President of the Municipal Art Society early in 2016. Before this appointment, she served as Executive Director for Franklin D. Roosevelt Four Freedoms Park, LLC, where she oversaw the construction of the Four Freedoms Park. Gina has also worked as an Associate Director at The Cooper Union Irwin S. Chanin School of Architecture Archive, and prior to this, she was as an architecture consultant and construction manager for various companies and projects in New York City, California and Florida.

The Island is no stranger to reinvention as its successive names attest: first, Varcken (or Hog) Island, then Manning’s, Blackwell’s, Welfare Island, and since 1973, Roosevelt Island. It has been both a place of exile and isolation, but also a place for experimentation. During the 1800s it notoriously housed a penitentiary, a lunatic asylum and smallpox hospital. Long-term nursing care facilities took advantage of the restorative island breezes by the 1920s. The current development of the island follows the 1969 Master Plan by architects Philip Johnson and John Burgee to transform the island into a vibrant residential community, a “New Town in Town.”

Considered visionary at the time, the Johnson/Burgee plan proposed a mixed income, racially-diverse community that was fully accessible to the disabled. Vehicular traffic was eschewed in favor of public buses powered by electricity, and garbage was collected through pneumatic tubes to a central compacting station—ideas ahead of the times still in use today. In 1970, the plan coalesced with a proposal to build a memorial park to President Franklin D. Roosevelt designed by renowned architect Louis I. Khan on the southern tip, and, once again, the island would be reborn. 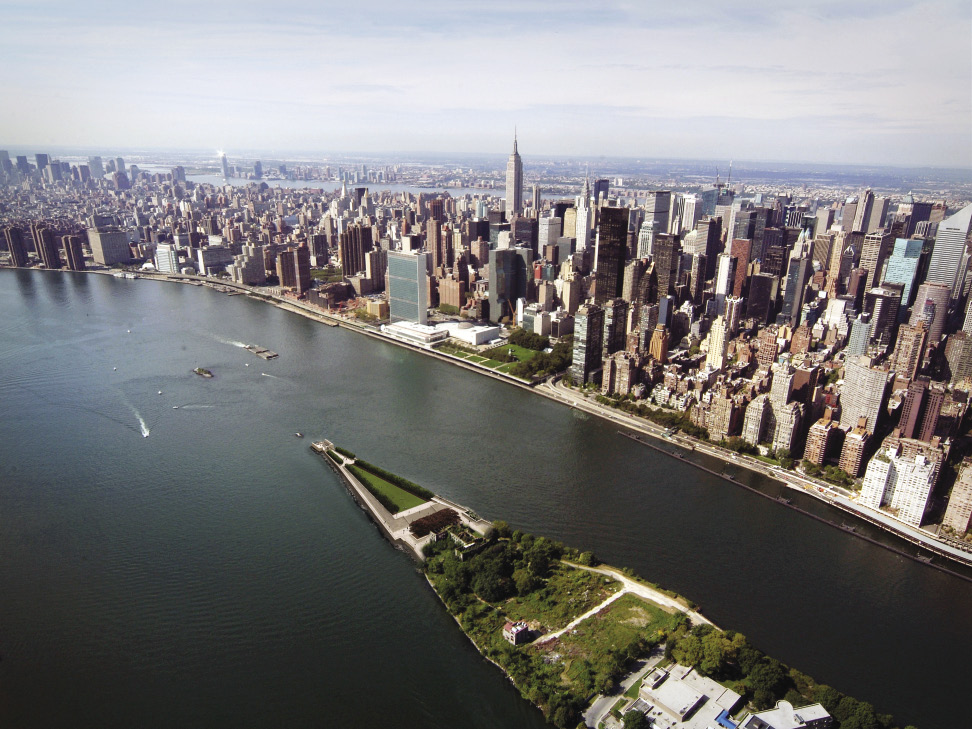 It never quite achieved the aims of the Johnson/Burgee plan, hampered by New York’s financial woes. It was challenging to attract residents to an area with limited public transportation to the greater city. Subway service did not arrive until 1989, and the Island saw a long period of neglect in the 1990s. It has been difficult to attract and maintain storefronts along Main Street.

The mid-2000s yielded some signs of revitalization. After years of neglect, the aerial tramway, the subway station, and the Roosevelt Island bridge to Queens were largely overhauled. New buildings brought several thousand more residents along with sorely needed stores and restaurants. A renewed effort in 2004 to build the Franklin D. Roosevelt Four Freedoms Park proved successful, and construction began last year. These improvements may have even made it the most desirable site for a new applied sciences campus.

The forthcoming applied sciences campus will radically change the character of the island. Goldwater Hospital will soon be replaced by 2 million square feet of classroom and research space, 2,000 students and 300 faculty members. It will create 20,000 construction jobs and 8,000 permanent jobs, generating some $23 billion over 30 years. These are staggering numbers for a narrow island serviced by one main thoroughfare.

This is a game-changing plan for Roosevelt Island. Its connection to the larger City has always been tenuous, and yet, this plan promises to put it firmly on the map. The trick will be to balance the needs of what is essentially a small-town residential community with the needs of a big-city university campus.

Theodore Liebman, FAIA, is a Principal at Perkins Eastman, a global architectural firm; board member, Consortium for Sustainable Urbanization (CSU); Senior Fellow, Global Urban Development (GUD); member of General Assembly of Partners and Urban Cluster. His work concentrates on issues of housing, lifestyle, and culture in the urban environment and a comprehensive view of long- term sustainability that challenges the limits of density in urban communities. Mr. Liebman was Chief of Architecture at the New York State Urban Development Corporation / Roosevelt Island -1970’s. He received B. Arch. from Pratt Institute, a M. Arch. from Harvard University, GSD and the Rome Prize Fellowship in Architecture. He was posted in Iran with the Harvard Institute for International Development 1975-77. World Bank funded housing project in Russia, 1995-96. He attended and participated at Habitat I, II, III and World Urban Forum 9, 10. He is an Adjunct Professor of Affordable Housing at NYU and has lectured extensively and served on architectural juries in the United States, Europe, Asia, Africa and South America. Liebman engages in dialogue with governments, investors, developers, and students to shape the environment and sustain cities.

Today, many great cities throughout the world are seeking the magic formula to create their “Silicon Valley.” I have been involved in the visioning and planning for several of these efforts abroad. I believe Cornell’s new university campus on the southern half of Roosevelt Island, focused on technology, will complete the island’s identity and have a positive impact on the surrounding boroughs, Manhattan and Queens. Roosevelt Island’s new developments will surely encourage, as Alvin Toffler once suggested, the “great growling engine of change—technology.” 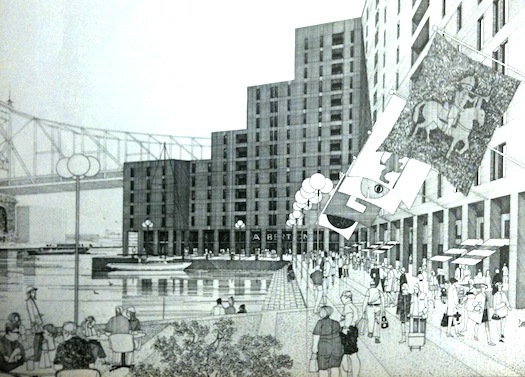 New York City has all the ingredients to spawn creative thinking and innovation. Roosevelt Island has seven miles of esplanade for contemplation at the water’s edge, the Island’s residents provide a sense of community and humanity, and the restored landmarks imbue a sense of history, with the FDR Four Freedoms park being a particular site of inspiration.

In the early 1970s, under the direction of the visionary Edward J. Logue, the NYS Urban Development Corporation created a model for a high-density, mixed-income urban community. Innovative housing, a car-free environment, electric buses and an accessible environment were completed by the 1970s, fast realizing the Johnson-Burgee vision for a “New Town in Town”.

Two additional achievements of these early years make Roosevelt Island a uniquely special place: the Tram to Manhattan, made necessary because of the F-subway stop construction delay; and the FDR Memorial Park by Louis I. Kahn, the recent realization of which I consider to be a miracle.

Now is the right time to add a major new element to the southern half of Roosevelt Island. The Island has struggled to define its ultimate identity, and I applaud and welcome its partner Technion to the island. An educational and research institution will bring great energy to the island. The concept plan by Skidmore, Owings and Merrill immediately recognizes the island’s two faces, one to Manhattan and one to Queens, taking full advantage of the water’s edge. In its further development, I hope the institution will relate well to the residential community to the north and better define the pathway to the FDR Four Freedoms Park to the south.

The pedestrian bridge to Manhattan in the Cornell plan will be a gift to the residents and the university. A second pedestrian bridge extending towards Queens could enhance the waterfront’s development and help Long Island City become an incubator for new businesses. Finally, I would encourage the University and the City to consider the Manhattan site at the landing of the Tram as a renewed gateway to the island, and develop a distinctive architectural identity and program for the underutilized site. 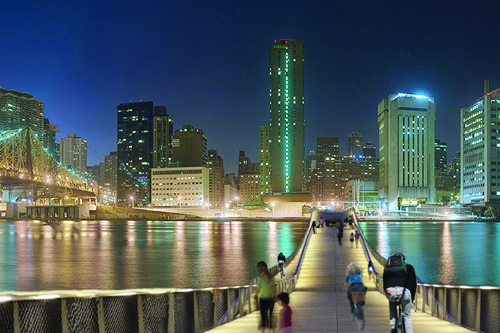 The idea of a planned community is not new. Many have tried it; some have even achieved great success. It appears that architects and planners like to tell people how and where they should live. As an architect and urban planner myself, I applaud some of these bold visions. Ambitious ideas are necessary to inspire and create much needed change. Yet, the promise of planned communities often contrasts their lived experience. The public only hears about the spectacular failures, but there is always a tension between the designer’s vision and practical realities.

Much of the tension arises because designers tend to forget that while their buildings are static, our lives are ever-changing; people move, kids grow up, household compositions change. Our experiences are transformed as we adapt to new innovations, technologies, and employment cycles.  And so it is with Roosevelt Island. The vision of a car-free community was ahead of its time and innovations like the AVAC (automated vacuum collection) system emphasized the designers’ celebration of modernist thinking. The buildings still excite architects (don’t architects always design for other architects?) but evoke negative reactions from some residents and visitors who find the environment sterile.

And here we are again, thanks to Cornell’s winning bid for a new science campus… the opportunity to envision a new future for Roosevelt Island. Did the idea of a car-free, high-density modernist community really work? Will it work in the future, when the proposed changes actually take effect? Are we going to make it a showpiece campus for visitors, or are we going to focus on creating a vibrant environment for the needs of science education and research?

When our Hunter College students conducted the 2009 Roosevelt Island Accessibility Study, they spent a lot of time talking to Roosevelt Islanders about their experiences. They learned that residents are not a passive lot by any means. Roosevelt Islanders are well-informed, articulate and care about the neighborhood and community they have nurtured over the years. Planners for the future would do well to learn from current residents who know what works well and what needs improvement.

The Hunter College study identified a lack of coherence in planning for the Island’s development. Resident’s quality of life on the island could be improved by expanding the retail corridor, improving on-island urgent care services, providing fresh food options, creating a bike share program, and protecting access to public spaces. Finally, the transportation networks for getting on and off the island were limited and unreliable, given the complexities of the island’s geography and demographics.

While the engineers consider the infrastructure issues and the designers propose visually and technologically sophisticated buildings, I am concerned about whether we are adequately considering the needs of current and future residents. Does the creation of a university campus mean that Roosevelt Island will become a playground for young urban professionals?  Will residents have a voice in shaping the scale and character of the developments or will these visions be imposed from the outside? Answering this question will go a long way in creating a design program that works, not just in the short term, but one that will endure for decades to come.

A simple way to begin is to make a commitment to participatory planning principles: fairness, by ensuring that all participants have equal opportunity to offer ideas and advice; respect, by recognizing participation of individuals and groups regardless of their particular views; inclusion, by including voices of those directly affected by the planning process as well as who were not able to participate; relevance, by focusing citizens’ testimony, advice, and deliberation on substantive issues; and competence, by using the skills and knowledge of participants to improve the creation of plans.

Participatory planning as described above is not easy. It requires a deep political commitment that emphasizes planning with people, rather than planning for people.