Move Our Buses at the Speed of New York 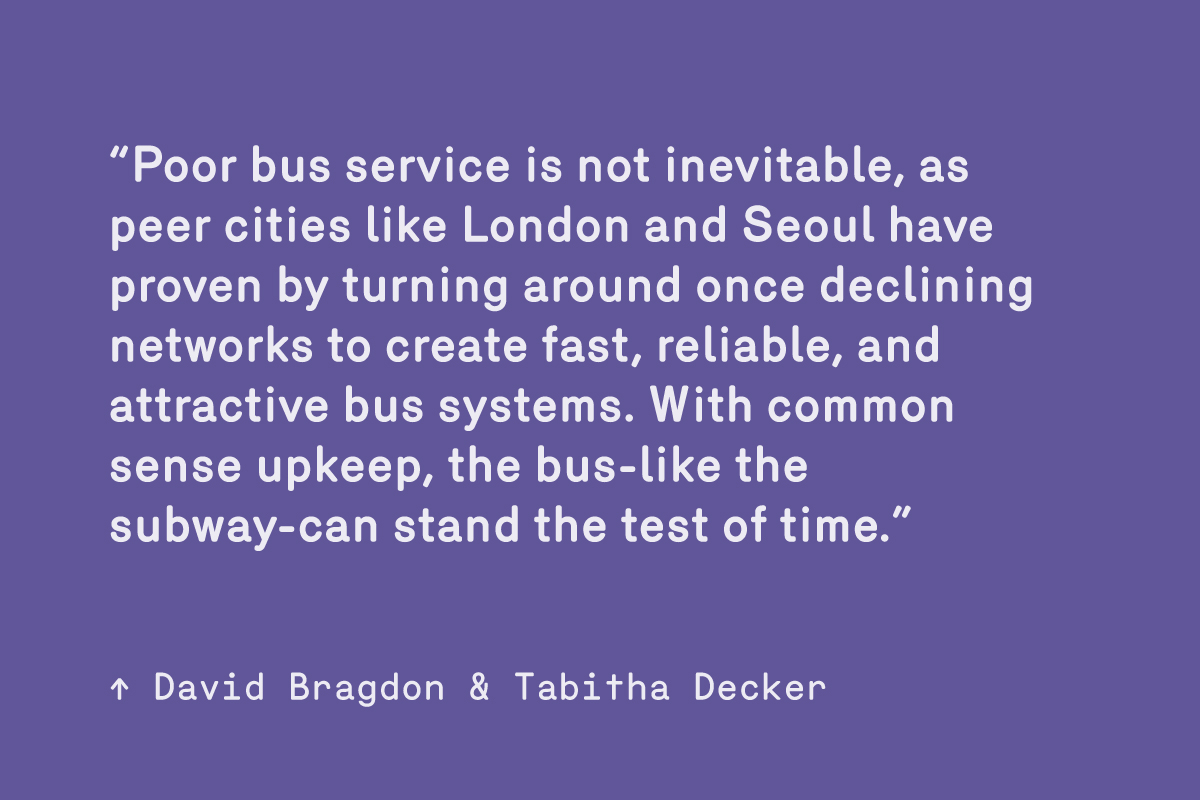 New Yorkers rely heavily on buses, taking more than two million rides on an average weekday. However, bus routes still follow old streetcar lines that haven’t been re-examined in decades, riders still line up one-by-one at the front door to board, and the introduction of digital technology hasn’t improved bus efficiency or reliability.

The buses that crawl down our streets today are not the service our city needs. Our buses should move at the speed of New York!

As a result, ridership has been steadily declining and trips in taxis and ride-hailing services have grown, leading to more congestion and slower travel times.

Poor bus service is not inevitable, as peer cities like London and Seoul have proven by turning around once declining networks to create fast, reliable, and attractive bus systems. With common sense upkeep, the bus-like the subway-can stand the test of time. We propose six practical strategies to update our buses today:

These improvements promise to benefit millions of New Yorkers, now and into the future. Buses reach neighborhoods the subway doesn’t serve; provide transit to those for whom the subway isn’t accessible; and keep the city moving without gridlock. Buses will only become more important as New York grows. While technological advances, like automated vehicles, might offer increased safety and convenience, the vision of a sea of automated single-occupancy vehicles conveying each New Yorker has more in common with Robert Moses’ twentieth century plan than the vision for a more accessible, people-centered city that should be New York’s future!

Imagine it’s 2026. Buses glide down dedicated lanes throughout the city. Riders enter through multiple doors and pay the fare with a quick tap. Major streets throughout the five boroughs feature high frequency routes with a ride arriving every five minutes. Buses are a reliable, quick, convenient, and affordable means of getting around, and everyone knows how to use them. We must act now to secure that future.

David Bragdon’s career spans multiple modes of transportation, in both the public and private sectors. David served as President of the Metro Council in the Portland, Oregon metropolitan area, the only directly elected regional government in the nation, and led Mayor Michael Bloomberg’s update of New York City’s sustainability plan.

Tabitha Decker’s work for more equitable and sustainable urban transit is underpinned by more than a decade of research in cities around the world, on topics ranging from gender and transport to the political stakes of new urban rail systems.