Maintenance: A Culture and a Choice 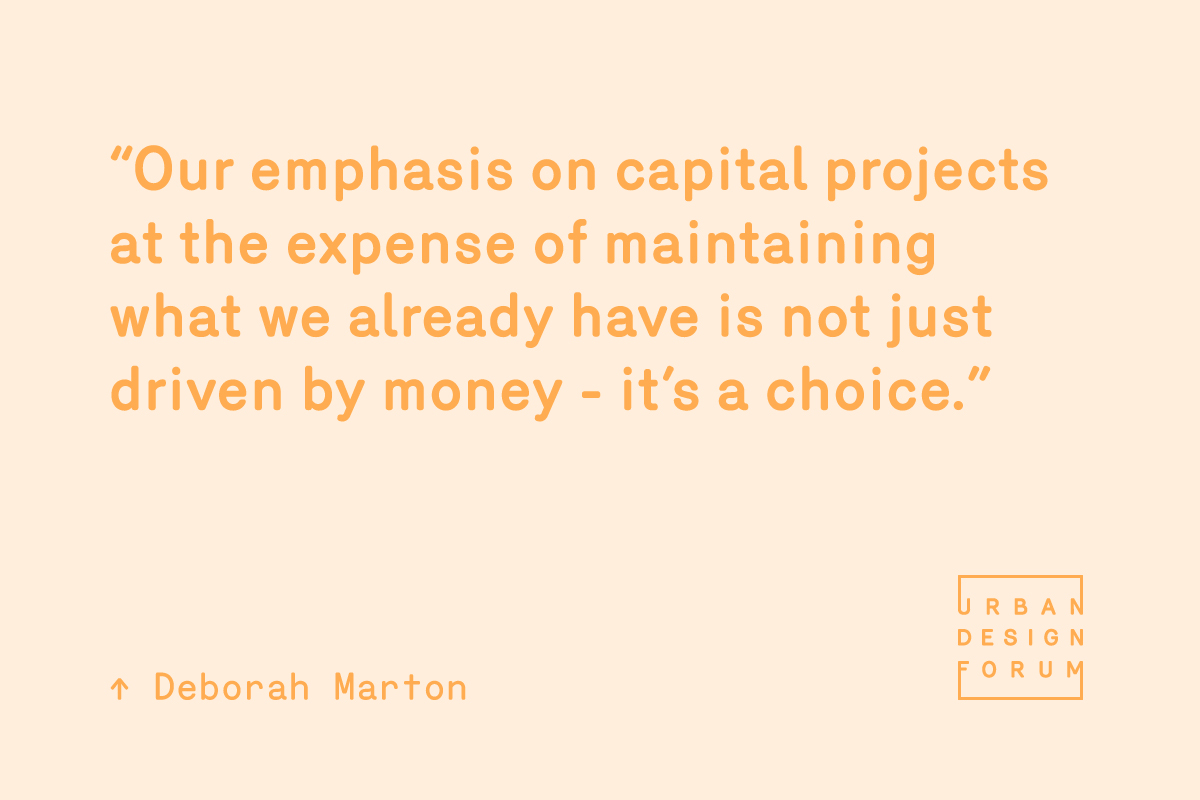 Regrets tinge our conversations about maintenance. We know we should fix our failing subway system, keep our streets clean, upgrade the plumbing in public schools, renovate Penn Station; we could go on—but, well, there’s just not enough money. There are other (read: new) things that must be built first. Innovation! Disruption! Maintenance lives in the shadow of the novel and shiny. But good maintenance is not a naming opportunity. It’s not depreciable. It won’t get you re-elected. It’s invisible.

In the abstract, we agree that if we build something we should care for it. But the way we actually allocate resources paints a different picture of our values. New York is one of the richest cities on the planet; the reality is our maintenance problems are rooted in political, social, and financial structures that lack integrity when measured against our publicly expressed ethics. As individuals and as a city, we are extraordinarily generous and inventive. We must—and we can—reinvent how we finance and steward our shared environment to reflect what we really care about.

To some extent, our failure to properly fund maintenance is an equity issue. As the income gap widens, wealthier segments of our population privately fund some of the services necessary for a smooth day-to-day existence. But universal suffering prevails when the basic infrastructure of society fails. All our lives are compromised by dysfunctional public transit, unsafe roadways, bridge collapses, filthy streets and parks. The fiber of our lives is inextricably bound to complex systems like transit networks, the internet, energy grids, and resilient shorelines. These systems deteriorate and become outdated unless we conceive and care for them as though we expect them to serve us well into the future.

Our refusal to invest in maintenance is a symptom of a larger problem. As a culture we have lost faith in the long term. Elected officials charged with resourcing the maintenance of these systems are embattled and underpaid. Election cycles of two or four years force officials to govern while engaging in constant campaigning and fundraising efforts.

In the 21st century we are adding layers to our city that its original planners could never have imagined, like fiber optics, public wifi, digital alarm systems, and ride-hailing, to name just a few. But in the United States, most government agencies remain structured more or less as they were in the 19th century, as do our expectations. Within their short terms, we expect our elected officials to start new initiatives and complete others. Similar pressures affect the corporate, technological, and financial communities that shape our cities, which adhere to the same ideology of “quarterly capitalism” that dominates civic decision making.

These pressures manifest as a dangerous temporal disjunction: complex systems like bridges, energy grids, and food delivery networks require careful and ongoing everyday care that, if done well, results in nothing happening. When it comes to infrastructure, for the most part that’s the outcome we want. By contrast, our business practices, short news cycles and re-election pressures demand immediate action, constant novelty, and short-term results.

Frequently the conversation around maintenance centers on money, or rather the lack of money. But if you really think about it, we have access to lots of money, and not just from tax revenue.

Every year huge sums are borrowed for all kinds of capital projects. Most of these capital projects are debt-financed over multiple years with funds borrowed through the issuance of bonds. Those capital expenditures are recorded on City balance sheets as long-term assets and depreciated. In other words, the expense doesn’t hit the bottom line immediately because the funds are being used to create a long-term asset; we can spread out the cost, and even better, the value of capital assets decreases over time.

Once complete, those streets, schools, bridges, and parks are maintained by expense funds—that is, tax dollars. Unlike capital expenditures, when these dollars are spent, they’re gone immediately. And every year, a portion of the City’s expense budget must pay interest and principal on the City’s debt. The more the city spends on debt service, the fewer funds are available for everything else.

Poor maintenance not only inflates the cost of future repairs, but also feeds larger social problems. Almost daily, new data connects the quality of our public environment to mental and physical health. There are real costs that result from a miserable daily commute, growing up surrounded by trash, or more obvious catastrophic failures like a road collapse. But there’s no way to integrate these costs into our annual budget calculations. Critics of current accounting methods do decry structural limitations that bar proper valuation of societal goods, but until new accounting principles are identified and generally accepted, maintenance and its associated benefits are just an expense.

No question, we need new housing, classrooms, fire trucks, and sewers. But our emphasis on capital projects at the expense of maintaining what we already have is not just driven by money—it’s a choice.

Those of us engaged in the design and construction of the built environment bear some responsibility for this fixation on the new and short-term. We are enthralled by innovation, in part because the profession and the general public reward our avant-garde creations. And of course, our livelihoods depend on commissions to produce the new.

We could shift our thinking and thrive. There are municipal and institutional models that prioritize and reward long-term thinking and action. One such example can be found in the mission of the Toyota Motor Corporation.

The famous “Toyota Way” is a set of principles and behaviors that underlie the company’s managerial approach and production system. It originated in the thinking of W. Edwards Deming, an American statistician, engineer, and populist philosopher. Revered in Japan, Deming was largely ignored in the United States until fairly recently, so reclaiming his work for deployment at the urban scale would be poetic justice. The values he embedded in Toyota’s corporate mission provide a compelling model for municipal decision-making, emphasizing integrity and long-term thinking.

Here, with slight editing, I reproduce and adapt relevant parts of the Toyota Way as the starting point for a new “Manifesto of Care,” that could change the way we work and how resources are allocated in our hard-charging, dazzling, beloved New York City.

Base your management and design decisions on a long-term philosophy, even at the expense of short-term financial goals.

Have a philosophical sense of purpose that supersedes any short-term decision making. Work, grow, and align every innovation, system, and institution toward a common purpose that is bigger than making money. Understand your place in the history of the City and work to bring the City to the next level. Your philosophical mission is the foundation for all the other principles.

Generate value for the client, society, and the economy—it is your starting point. Evaluate every business and municipal function in terms of its ability to achieve this.

Be responsible. Strive to decide your own fate. Act with self-reliance and trust in your own abilities. Accept responsibility for your conduct and maintain and improve the skills that enable you to produce added value.

Imagine our public realm formed by these tenets. Our every action could be guided by a commitment to public service, by sensitivity to history and equity, and by sustainable strategies that comprehensively incorporate economic, environmental and social well-being. We must embrace long-term values, publicize them through our work and in every interaction with colleagues and clients. Sometimes the long-term solution will require low-cost, easy-to-manage outcomes that may not deploy cutting-edge design or technology. That’s okay, as long as every choice buttresses our collective dignity. Potholes are not dignified; arriving at Penn Station is an affront; walking through trash-filled streets diminishes us. We can do better.