Housing: How Did We Get Here? 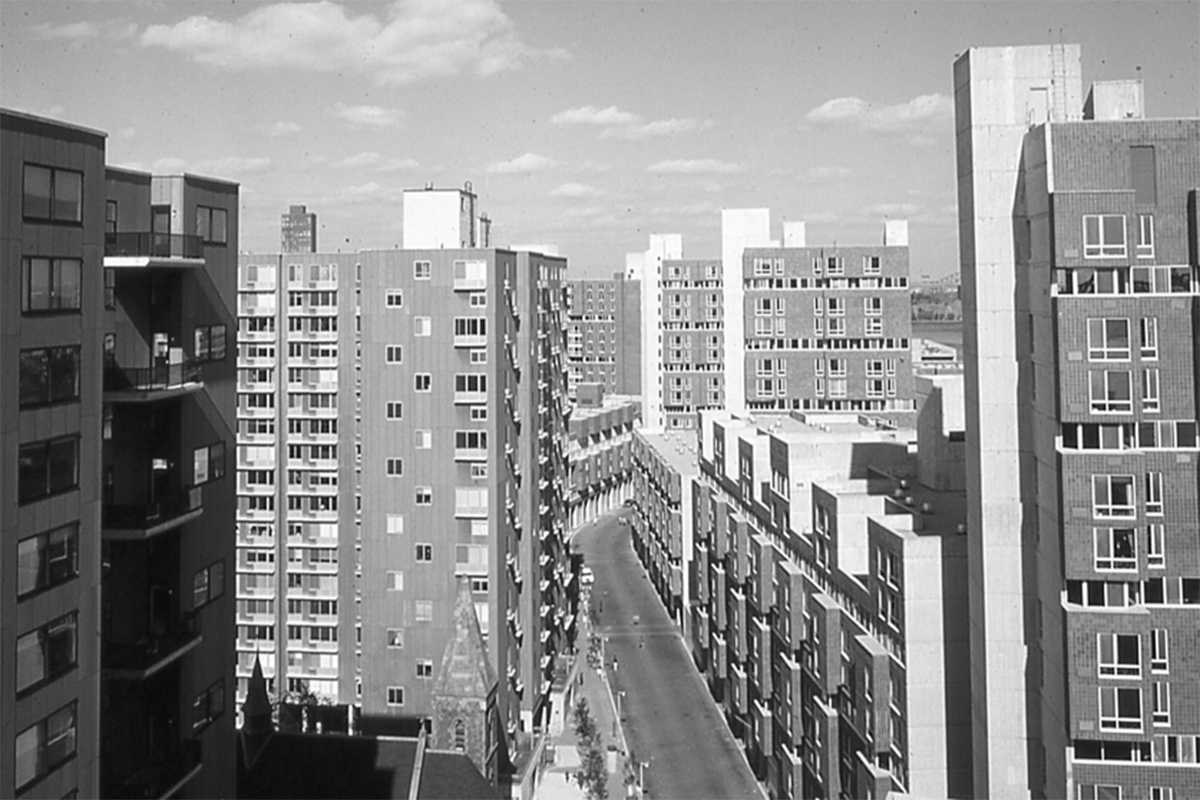 Theodore Liebman, FAIA, has devoted his career to examining the impacts of development on people and the environment, with an eye to improving cities and shaping future settlements. Now a Principal with Perkins Eastman, an Adjunct Professor at NYU, and Board Member with the Consortium for Sustainable Urbanization, Liebman casts his mind back to his tenure as Chief of Architecture at the New York State Urban Development Corporation (1970–1975). In the face of our current affordability crisis, he reflects on lessons learned and backs a vision for inclusive and sustainable cities through the concerted development of housing and neighborhoods.

Today more than half of the world’s population lives in cities. By 2030, it is projected that 6 in 10 people will be urban dwellers. While this means different things in different corners of the globe, the consensus is clear: cities provide efficient economies of scale, access to a range of amenities, good public transit, and convenience. Despite drawbacks like congestion, poor planning, and
aging infrastructure, we know that with risk-informed planning and
management, cities can become incubators for innovation and sustainable development. But the common denominator, without which none of the aforementioned can occur, is good and equitable housing.

New York City is currently undergoing a crisis of affordability. Our low-income citizens who do not live in NYCHA housing are forced to live far from their workplaces, share dwellings in already overcrowded buildings, live in housing that’s in dire need of repair and refurbishment, or even all of the above. So this affordability crisis doubles as a housing crisis.

In response, instead of developing brand new affordable units exclusively, the City has rezoned several neighborhoods to allow for more density—an approach that hedges its bets on the private market supplying adequate affordable and market-rate housing. But even with a Mayor whose heart is in the right place and the added amendment of Mandatory Inclusionary Housing, the current crisis cannot be solved without major federal-level funding and zoning changes in the outlying areas of Westchester County and Long Island.

But beyond funding and zoning, what is truly required to solve New York’s affordability crisis is a change of philosophy. We need to consider the housing crisis as a breakdown in how we approach the building of equitable urban communities, not just a series of financial and political obstacles.

Looking at some of the affordable housing currently being developed, I think back to nearly a half-century ago, when I worked as Chief of Architecture for the New York State Urban Development Corporation (UDC). Under the leadership of Edward J. Logue, the UDC was created in 1968 to, quite simply, build housing for the poor and to create jobs in the state. Among our first projects were high-rise towers that, while well designed, were not wholly considered within the context of their locations and ended up contributing little to the urban development of neighborhoods. So we began to look at the evident problems associated with “tower in the park” housing estates, like those championed by Le Corbusier, and concluded that the self-containment and isolated nature of these behemoths was not conducive to community building.

The UDC then developed, in partnership with the Institute for
Architecture and Urban Studies, a prototype for low-rise high-density housing, resulting in Marcus Garvey Park Village, in the Brownsville section of Brooklyn. Marcus Garvey was a success because it demonstrated that housing densities equal to—and often exceeding—those of high-rise towers in neighboring “superblocks” could occur in NYC. The communal architectural language of the buildings helped foster greater connectivity and socialization among residents, as well as better security and activity on the street.

Like any good history lesson, we must consider our shortcomings alongside our successes. Around this same time, HUD was playing a significant role in developing housing in our cities, thanks in large part to the Fair Housing Act of 1968. But like our work at UDC, their chief focus was limited to housing, at the expense of urban development. The UDC’s contributions to New York’s cityscape include more than 33,000 units of affordable housing. On Roosevelt Island, in particular, we demonstrated that a housing community comprising 50 percent low and middle-income residents could prosper. However, what we failed to realize at the time was that well-designed housing alone cannot make a community; alongside such initiatives there must also be an emphasis on neighborhood development, i.e. jobs, local economies, integration, and home and business ownership. The lesson here is that for housing to be successful, it must not stand alone—it must be part of a larger, sustainable community.

The bulk of NYCHA housing was built in the post-World War II boom decades, when Robert Moses sought to raze old tenements and replace with more modern tower-in-the-park style developments. Not unlike UDC, these developments were handicapped by social and physical isolation, or worse still, made no effort to incorporate community building into the housing plan. I applaud NYCHA for its current efforts, under its ‘NextGen’ moniker, to transform a number of its high-rise superblocks into developments wherein housing and community are not mutually exclusive. Mill Brook Terrace in the Bronx, a new affordable housing building for seniors, and the combined DREAM Charter School/Yomo Toro Apartments in East Harlem, are just two worthwhile examples of how once isolated superblocks can be developed in ways where community building is integral to the design and planning.

But the best efforts of Mayors, Governors, and public-private partnerships cannot turn the tide of our cities’ affordable housing crises without assistance at the federal level. UDC’s own successes relied on a combination of federal, state, and city subsidies, but when Richard Nixon froze all federal subsidies for housing in January of 1973, the UDC was subsequently forced to disband its housing program in 1975, after completing projects already in the pipeline.

HUD must not only provide housing subsidies to cities in need, it must also fulfill the mission of its name: Housing and Urban Development. It is imperative to creating equitable and integrated communities that can thrive and be self-sustaining. To that end, HUD would be wise to further explore ways in which they can prioritize health and wellbeing in future housing, introduce more accessible open space in their communities, and enhance climate and economic resiliency measures. All of this and more would set HUD on a path to deliver not only good and equitable housing, but great and sustainable neighborhoods.