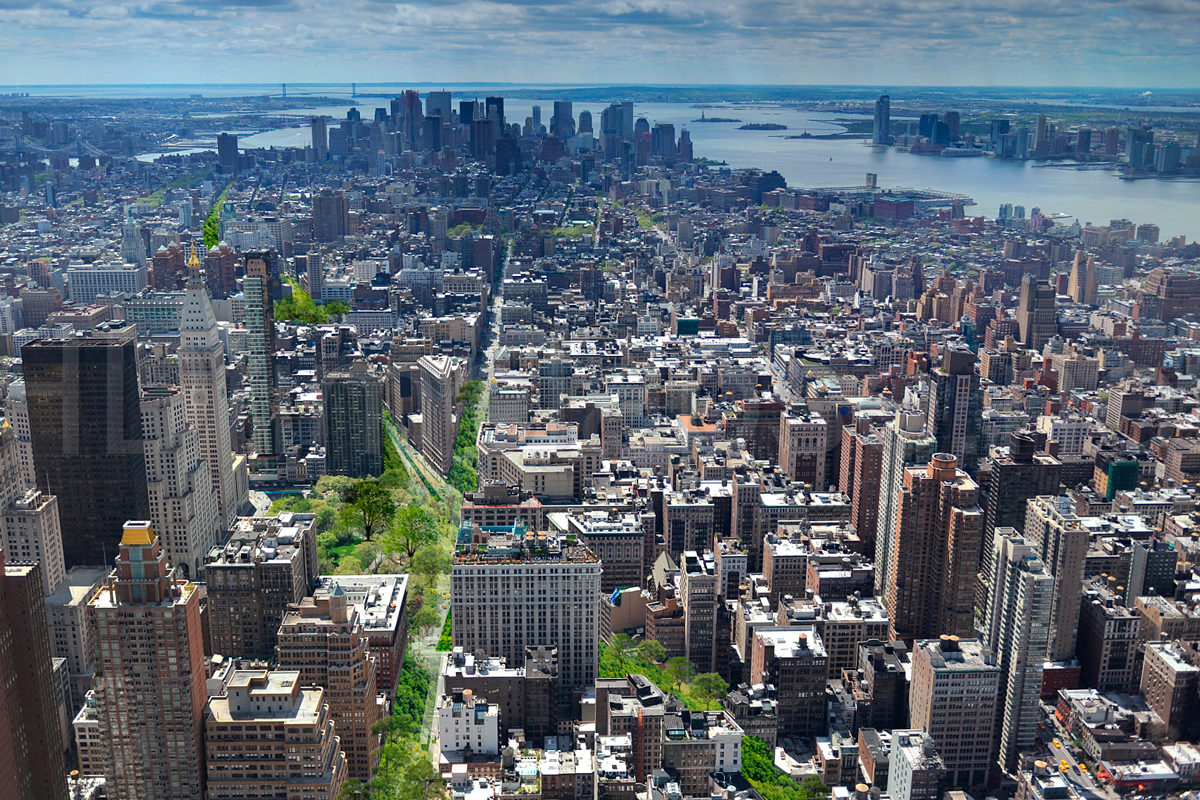 Starting as a ridge-line trail running through Manhattan’s pre-urban landscape, Broadway has long been a central corridor for the region. It was a major commercial and transportation spine for much of the City’s history, maintaining its importance through the advent of the city grid in the early 1800s and into the twentieth century. However in recent years, the paradigm has shifted. Broadway no longer functions the way it used to, and this gives us an opportunity to radically reconceive the public realm along this historic avenue.

We no longer need Broadway as a street. We should transform it into a linear park—a Green Line running through midtown Manhattan.

Broadway today is an anomaly, unneeded for vehicular traffic, that cuts through a standardized urban form. It is an extra street modulating an otherwise functioning grid. However, it is the only road that connects four of the most important public spaces in the city: Union Square, Madison Square, Herald Square, and Times Square; each found where this diagonal route crosses an avenue and marks a major street. If these plazas were linked we could transform the city’s public realm from inhospitable, polluted, and car-centric to vibrant, green, and pedestrian-oriented. Imagine Broadway as the Green Line: a combination of street and park. This could be the next phase of life for this ‘bonus’ street and a new type of public space for the city. Lush planting, bioswales, playgrounds, dog runs, permeable pavers, jogging and bike paths, performance areas, and plenty of seating could run through the heart of midtown! The Green Line would be a benefit to the environment, and an asset for local businesses and residents alike.

Building on historic precedents of pedestrian-oriented streets—like La Rambla in Barcelona—the Green Line would integrate landscape to enhance and prioritize the pedestrian experience, while still allowing for emergency access and cross-town traffic. With relatively minor physical interventions, we will be able to reimagine the disruptive geometry of Broadway as a memorable, recreational destination for all New Yorkers. This could become a public space buzzing with a myriad of activities, connecting the major plazas in the City, and fully integrated with the life of New York.

Jonathan Cohn is the studio leader for Perkins Eastman’s Transportation and Public Infrastructure studio. In leading multidisciplinary teams on some of the largest transportation projects in NYC and elsewhere, Cohn’s design vision focuses on the potential for the public side of urban infrastructure.