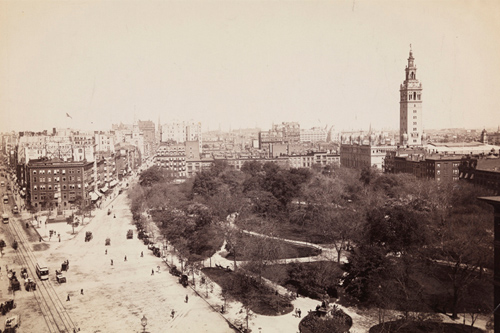 Editors Note: As the Museum of the City of New York celebrates 200 years of the Manhattan grid in its current retrospective, it seemed only appropriate to call upon an architect with a unique opportunity to adapt the city’s grid: Stanton Eckstut, co-author of the 1979 Battery Park City Master Plan. –DM

The defining feature of a city–its street and block pattern–is a convenient tool to organize land, circulation, open space, and infrastructure. A city’s street and block pattern gives residents a way to navigate its bounds. When we think of New York City’s street grid, we tend to think of the linearity and right angles of Midtown Manhattan, where there is little distinction between streets and property is equally distributed among every block. This egalitarian parceling of land successfully promotes both movement and competitive property values. Indeed, when laid out in 1811 from Houston Street (then named North Street, as it represented the northern boundary of the city for the vast majority of residents) to 155th Street in Harlem, property values virtually skyrocketed, creating the beginnings of the New York’s obsession with real estate. This orthogonal grid was good for the production of buildings. And even better for developers.

Yet this same grid has not been very successful in responding to its unique context: in distinguishing where there is more movement, and where there is less; where large-scale, higher-density development should be promoted; and equally important, where smaller, more intimate environments should be located. The interruptions to and variations on the ”Manhattan Grid” are the true prototypes for making great cities and urban places. In New York, the locations where the diagonal orientation of Broadway intersects with the north-south avenues and east-west streets created Union Square, Madison Square, Herald Square, Times Square, and Columbus Circle. These spaces are about people. They accommodate automobiles, but do not allow them to dominate—creating a much more enjoyable city for people to inhabit.

Contrary to what many observers have speculated, the Manhattan grid was not the model for Battery Park City. When Alex Cooper and I designed the master plan in the 1970s, after several previous failed attempts by others to either replicate what was being done elsewhere under very different circumstances, or introduce new, unnatural patterns of development, we focused on the street as the defining element of the neighborhood. We looked upon the buildings as a means of creating public spaces. We took our cues from Lower Manhattan and Broadway with its skewed angle that opened the street to the cooling breezes from the southeast in the summer and offset the cold winds from the northwest in the winter. Battery Park City is successful because of its incredible variety of spaces and blocks, which afford more opportunities for a diversity of experiences and ideas. By design, there is no one street or block in Battery Park City like another.

It turns out that this is a good recipe for private development, also, because private development and property value is very focused on public space and on the creation of “addresses.” In its dead ends, its starts and stops, its twisting and changing streets, Battery Park City provides an ever-changing family of independent spaces with distinct identities and opportunities. And when the streets meet the water’s edge, public space is celebrated with prominent public parks and squares, most notably the esplanade.

When I begin designing cities and environments for urban placemaking, I might start off with an orthogonal pattern as a simple and helpful tool for organizing development. But, in order to create a unique environment with special addresses and opportunities for interaction within the city, I quickly start to plan for the exceptions. It is these variations that create opportunities for increased real estate values and a more enjoyable city in which to walk and enjoy public life.

People’s perceptions of a city are formed by its streets and not its buildings. Streets are where the delights—and petty inconveniences—that define life in the city take place. It is for this reason that neighborhoods with a diversity of streets like Battery Park City offer a greater sense of clarity to how people live and work. In places that have a sense of spatial differentiation, there is a deeper, more intense feeling for the activity associated with that place. It took the rationally planned regularity of the Manhattan grid to marry the entrepreneurial energy of New York with the relentless resourcefulness that has been the hallmark of its inhabitants. But it took the collision of this rationally planned system with the twists and turns of Broadway to produce the places that make life within that grid truly livable.