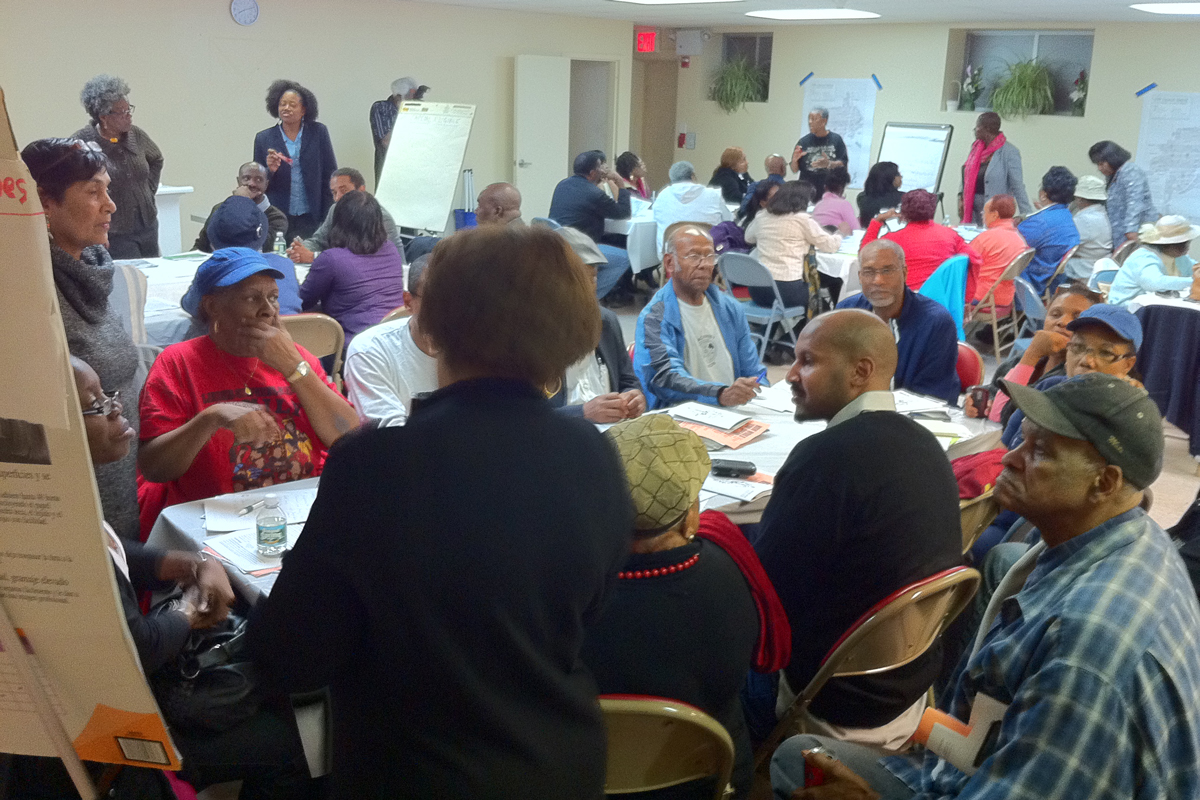 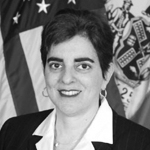 Danny Fuchs is the Director of Capital Planning at the NYC Department of City Planning. As the leader of the Capital Planning team, established in 2014, he works to advance neighborhood-based investment strategies and promote more collaborative planning through data and technology. Jennifer Godzeno is Deputy Director at ​the Participatory Budgeting Project​. ​She focuses on ​scaling the integration of ​grassroots engagement​ and civic technology​ into public investment decisions across the US and Canada. She is also​ ​a​n inaugural​ Culture of Health Leader​​ with the ​Robert Wood Johnson Foundation, and ​serves on the Stamford, CT Planning Board. Ronnie Lowenstein was named Director of the New York City Independent Budget Office in August, 2000. Prior to joining IBO, Ms. Lowenstein was an economist in the Domestic Research Division of the Federal Reserve Bank of New York and taught economics at Barnard College. 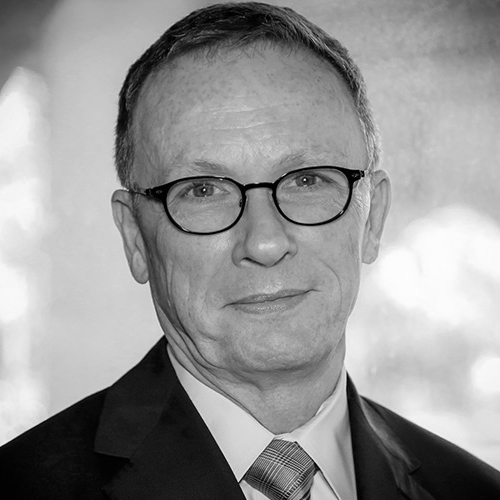 As Deputy Comptroller for Budget, Preston Niblack is responsible for overseeing the work of the Budget Bureau including monitoring of New York City’s fiscal and cash position, analyzing and reporting on the City budget, and issuing reports on various budgetary and economic issues. 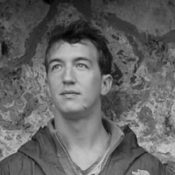 Henry Grabar is a staff writer at Slate who writes about architecture, transportation, and public space. Previously, he was a senior editor at Urban Omnibus, the magazine of the Architectural League of New York. Henry was also a member of the Forum's inaugural Forefront Fellowship in 2016.

For the second event of our Maintaining inquiry, we were joined by Danny Fuchs, Jennifer Godzeno, Ronnie Lowenstein, Preston Niblack and Henry Grabar for an investigation into how the city budget impacts the built form of New York City.

The New York City budget starts from scratch every year. Tasked with allocating resources to services and infrastructures that run the city, the details of this enormous undertaking are not common knowledge. How does the city budget process affect our daily lives? How do City agencies participate in the process? Are they forced to compete with one another, or allowed to collaborate? Is there room for improvement and innovation?

Henry Grabar moderated a discussion between our panelists that oriented our Fellows to the workings of the city budget and examined how this abstract entity informs the urban landscape. 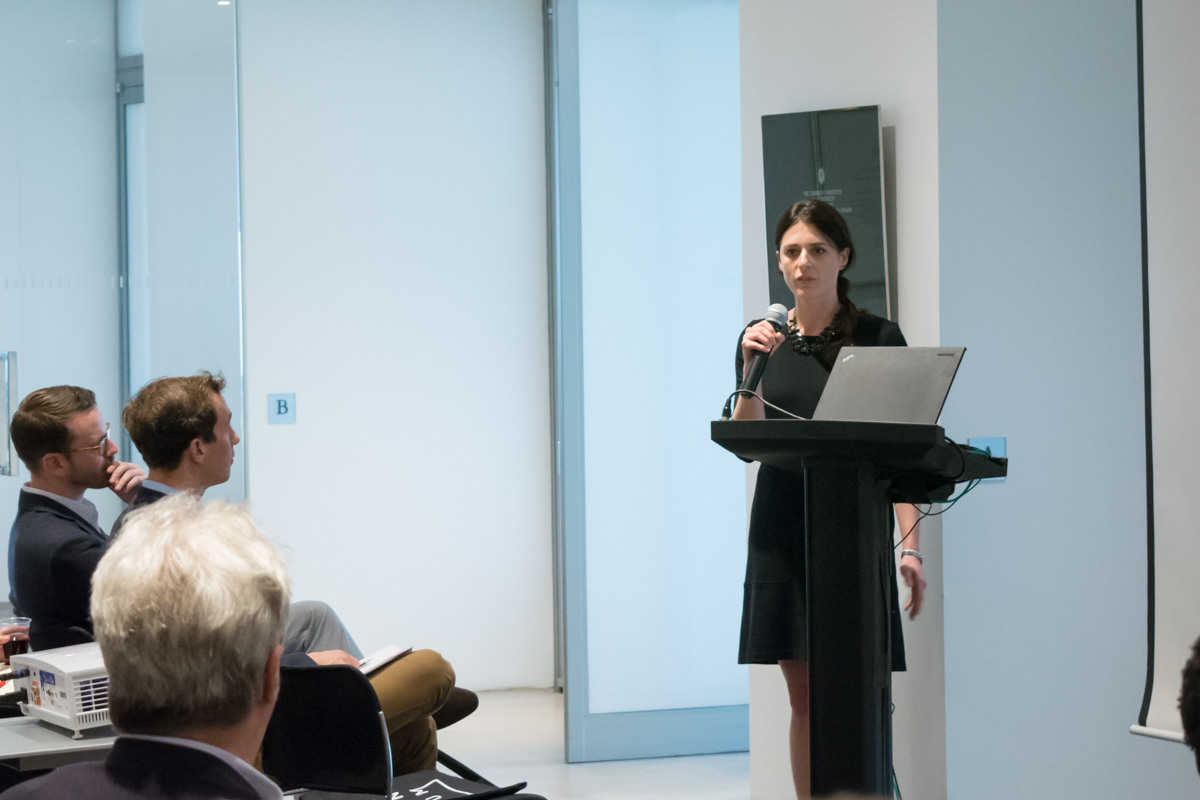 Balanced Budget, Balanced City? was held at the offices of Skidmore, Owings & Merrill, where Ken Lewis and Jennifer Pehr, Fellows of the Urban Design Forum, introduced the space and set up our investigation into how the City Budget is formed, how priorities are established, and how funds are distributed to various projects. 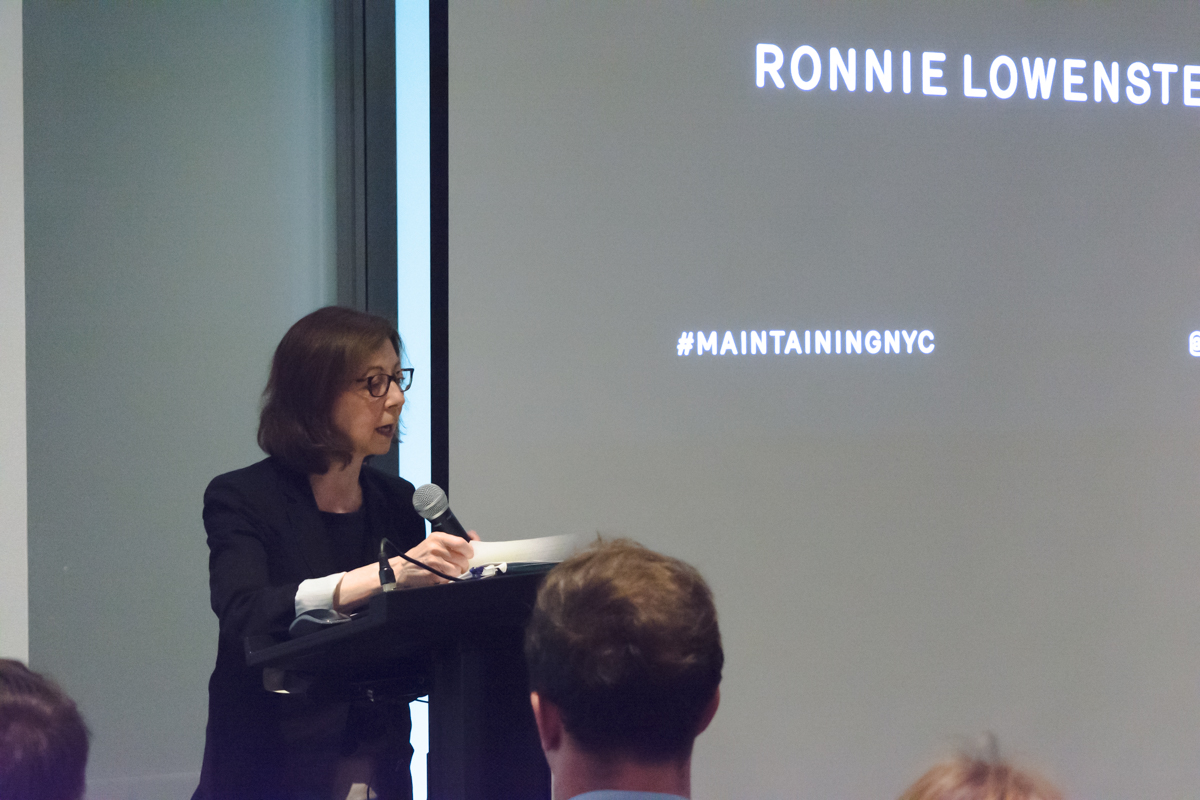 Ronnie Lowenstein then began our inquiry by noting how the New York City operating budget is under unusually strict rules as a result of the 1970s fiscal crisis, resulting in checks to prevent excessive borrowing and unsustainable levels of debt.

The New York City budget, unlike the Federal budget, is divided into two categories: expense and capital. The City’s expense budget details how much money will be spent for daily operations, including everything from paying teachers to buying paper-clips, and is funded via taxes, fees, fines, asset sales and intergovernmental aid. Also as a result of the 1970s fiscal crisis, the expense budget must be balanced each year.

While the expense budget focuses on the day-to-day operations of the city, the capital budget addresses the City’s long-term investment goals: a capital project must have a use life of at least 5 years and cost at least $35,000. Yet, also particular to New York City, the capital budget is funded virtually entirely from borrowing through the issuing of long-term debt, whereas other cities implement a mixture of borrowing and pay-as-you-go to reduce risk. Nonetheless, there is an intergenerational logic behind borrowing heavily for long-term projects: if a project will be used for 30 years, then future users need to pay their fair share as well.

The capital budget is comprised of three primary documents. The capital budget for the upcoming year, the 4-year capital commitment plan (a commitment is when a project is awarded a contract and then registered with the comptroller’s office), and the 10-year capital strategy which is released every two years detailing very broad long-term goals of the city, including maintenance and programmatic replacement. 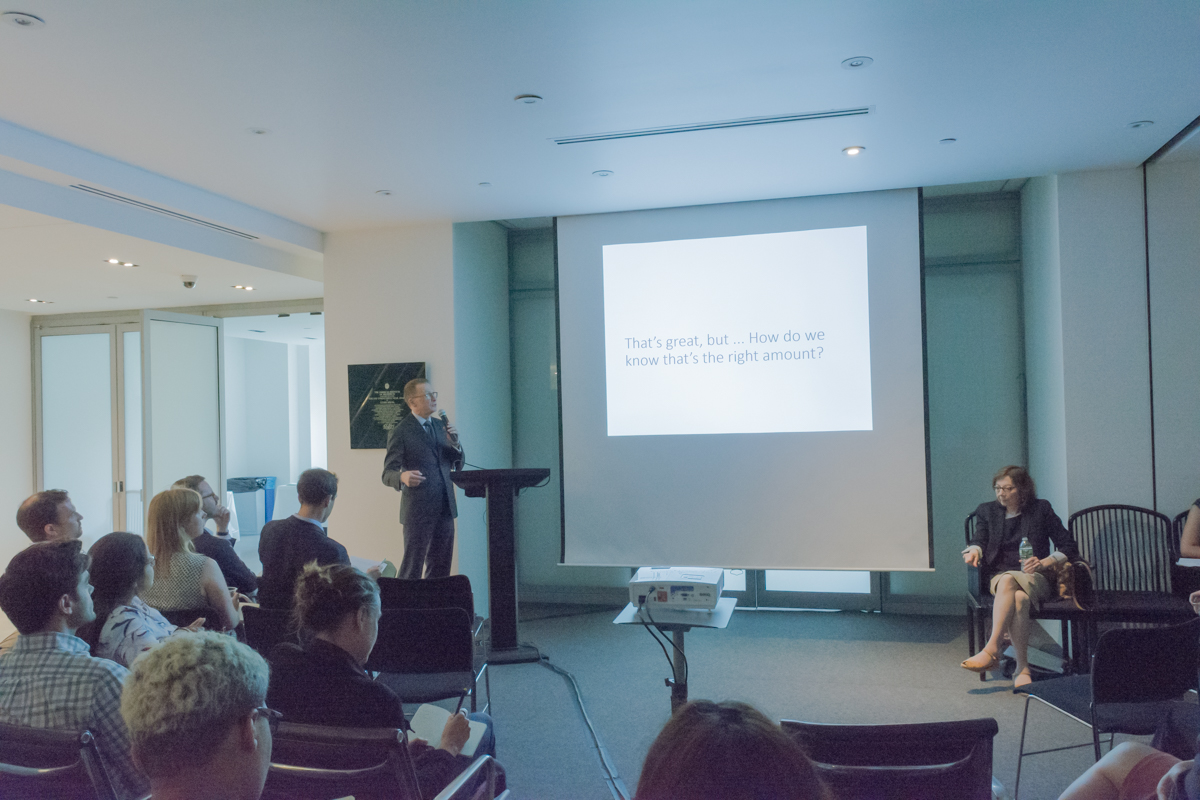 Our next speaker was Preston Niblack, who focused on three questions:

Picking up where Ronnie left off, Preston began by looking at our most recent 10-year capital strategy. One of its three categories of investment is for state of good repair, which means repairing assets to conditions that deliver its full benefit. These measurements and evaluations are tricky to ground, and even as the latest budget is investing 53% in this category, we are left with difficult questions: How do we know what amount is the “right” amount? How do we go about analyzing how much maintenance is enough?

This structuring of the capital budget yields significant shortcomings in regards to our knowledge of what capital assets we are maintaining. First and foremost, there is an inadequate assessment of the condition of capital assets, i.e. how many are in a state of good repair, etc. Additionally, even if we had reliable information and data, it would not appear in a budget document.

Lastly, in addition to having limited knowledge of what we are doing in terms of maintenance, we currently lack the sufficient knowledge to know how we are maintaining our assets. The current assessment of the condition of capital assets occurs via the Assets Information Management System (AIMS). Yet, this system fails the maintenance of our infrastructure because it only includes items in the budget of more than $10 million and with more than a 10-year useful life cycle; the dollar amounts shown do not necessarily reflect dollars committed in the budget; and, again, information is lacking on the condition of infrastructure.

However, even if we managed to overcome all of these issues of budgeting, communication, information and transparency, we’d still be left with significant philosophical questions about which projects to prioritize, when to repair and when to upgrade, and what is the right amount of assets to be in states of good repair. 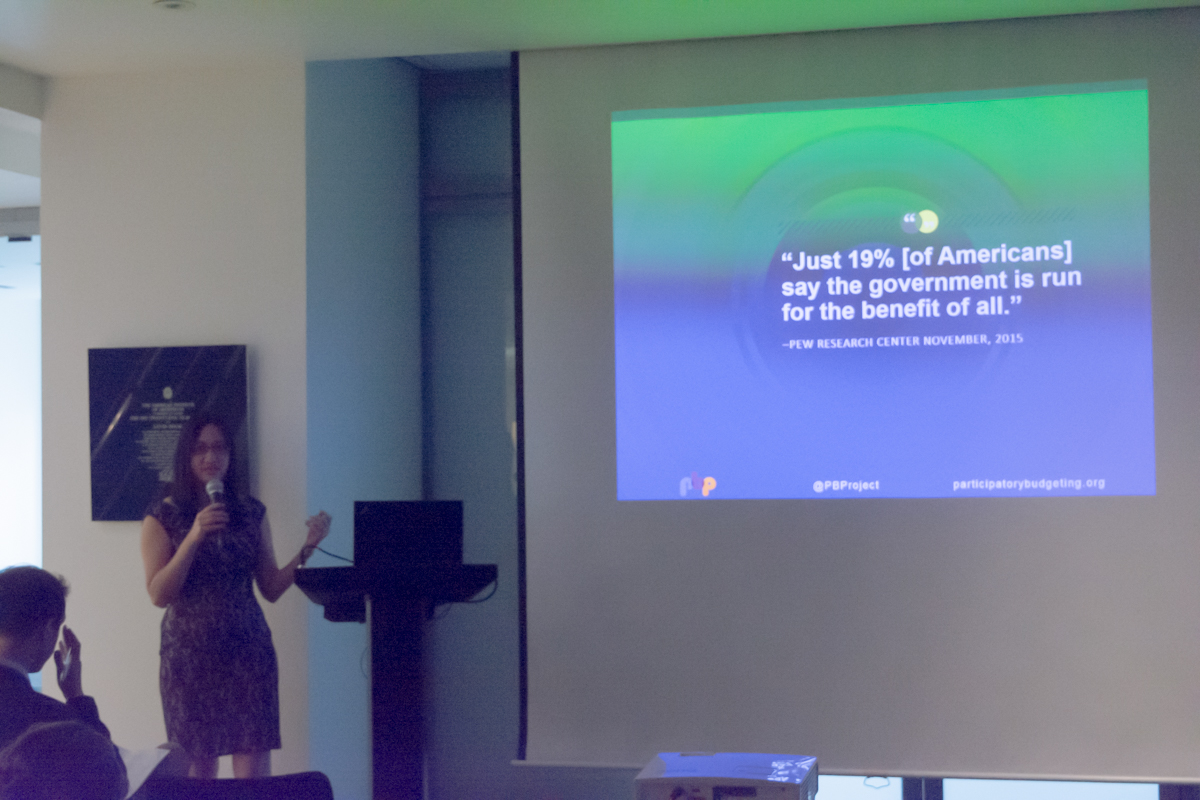 The main aim of participatory budgets is to get the public involved in the budgeting process. By increasing their direct involvement in certain aspects of the budget, this project helps them understand this complicated aspect of government and builds greater trust between the public and government.

Furthermore, participatory budgeting processes generally involve engaging citizens from populations more representative of the community, including more lower- and middle-income citizens and citizens who are either not registered to vote or are apathetic toward the voting process. Therefore, when communities engage in a participatory budgeting project, they have the potential to build a larger political constituency capable of being involved in politics year-round and holding their politicians accountable to their promises.

From the issues of local governments, in addition to building a more proactive constituency, this process can yield more productive, efficient and impactful meetings. Instead of establishing a dynamic where there is minimal dialogue between citizens and government officials, participatory budgets can elicit more democratic and thoughtful responses; reveal the real needs of the community; and, reveal underlying and previously unknown issues to officials.

This last benefit is particularly relevant to issues maintaining community assets and infrastructure. For example, when the community revealed their school bathrooms lacked doors and that the building lacked central air-conditioning, this engagement prompted local officials to start a campaign to address these issues.

However, while a participatory budgeting project can yield more democratic and equitable investment and repairs, and while there were 102,000 votes this past year in to decide on $40 million, this process is still quite small relative to the actual budgets of our city government. The main question going forward is exploring how to scale this small mechanism to further educate and empower citizens. 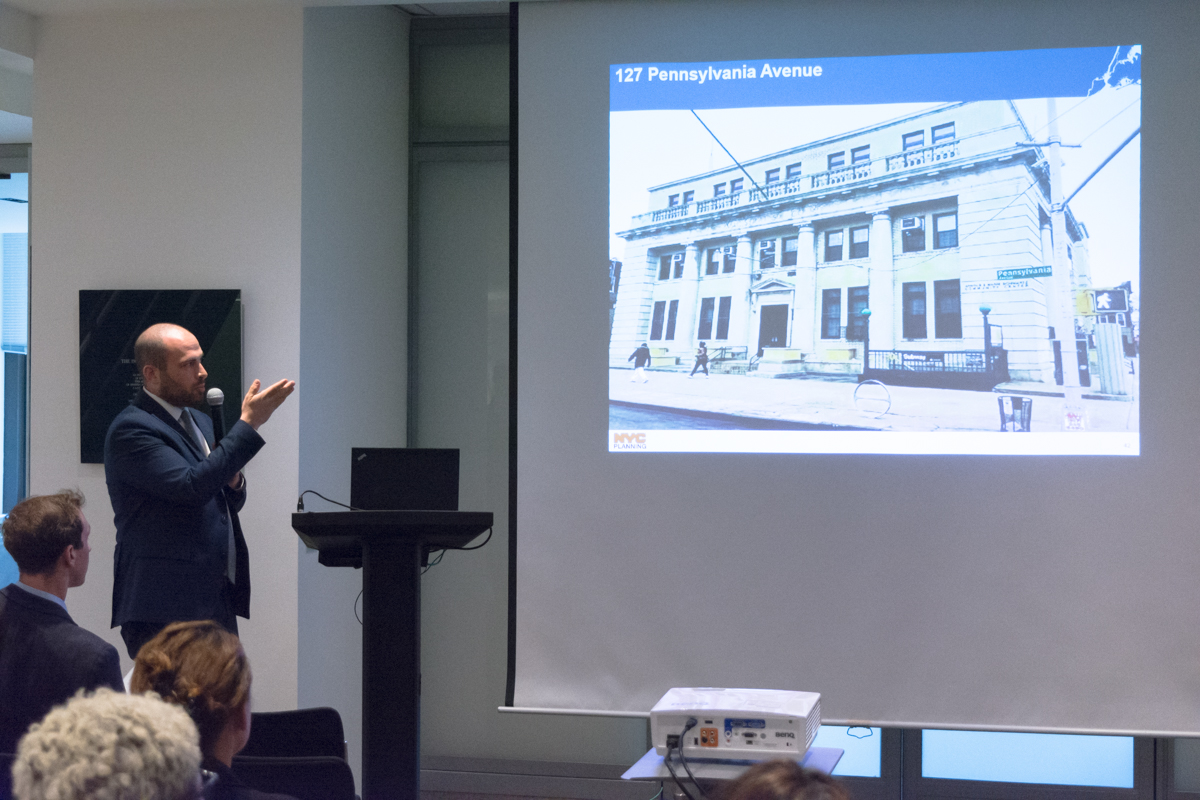 The last speaker for the evening was Danny Fuchs, who in describing how City Planning now has a division dedicated to the capital budget for the first time since the 1970s fiscal crisis, gave an overview of the Capital Planning Division’s work, some of their small-scale projects and where the agency is looking to improve going forward.

The aim of the Capital Planning Division is to help New York City make better capital decisions informed by data analysis that DCP is uniquely positioned to provide. This mission is currently carried out through a few key activities. First, DCP aims to complement neighborhoods changes, such as a rezoning, with prudent capital investment to catalyze development, accommodate the new growth and to meet the community’s long-term needs. Thus rather than meeting the bare-minimum expectations or requirements, and rather than addressing the needs of just one site or neighborhood, the DCP Capital Planning Division hopes to develop projects with a holistic and long-term approach.

Going forward, these goals can be supplemented with an increase in data-reliability and accessibility. This will mainly be achieved through the CPD’s website, capitalplanning.nyc.gov, which reveals the capital projects around the city, the data of each location, and allows individuals to offer feedback for specific sites to ensure that the data is accessible and democratic. 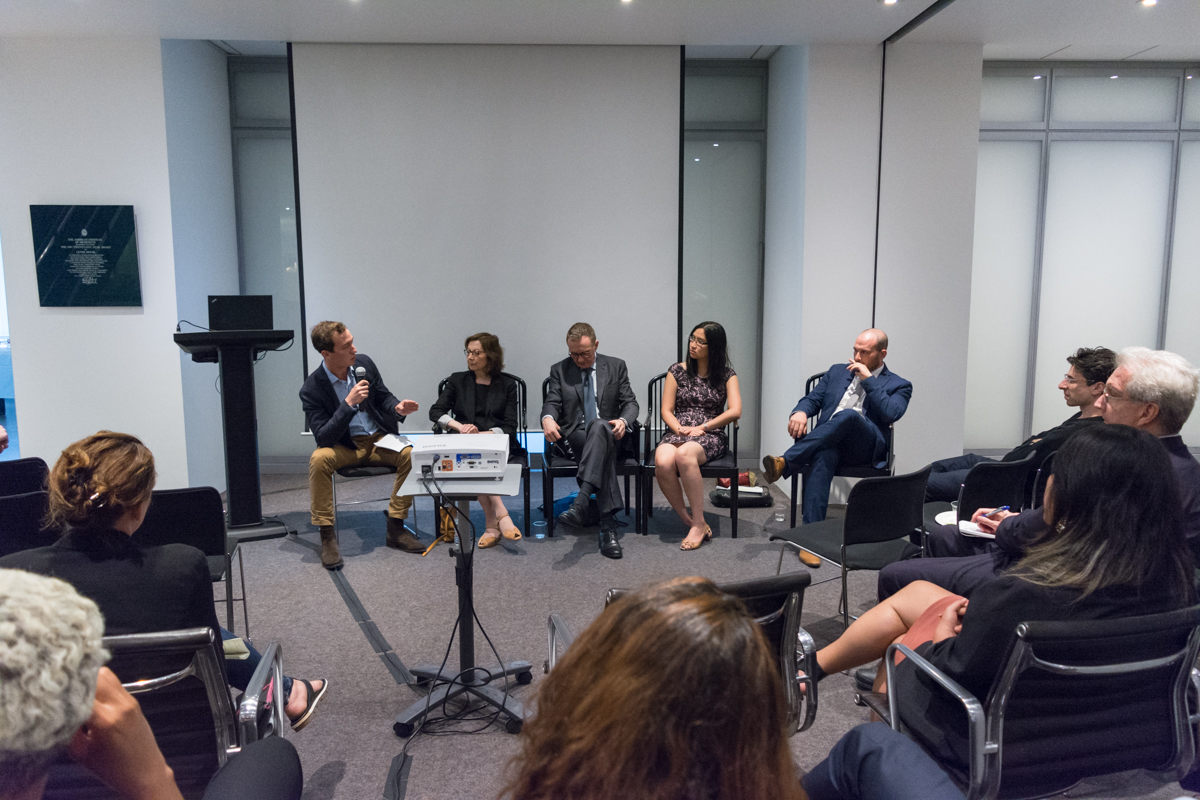 After our speaker’s presentation, Henry Grabar, the event’s moderator, pushed the speakers to consider how the structuring of the City’s budget influences the types of projects the City can move forward with, how the participatory budgeting process alters the behavior of politicians, and how the 1970s fiscal crisis still shapes the structure of the City budget. 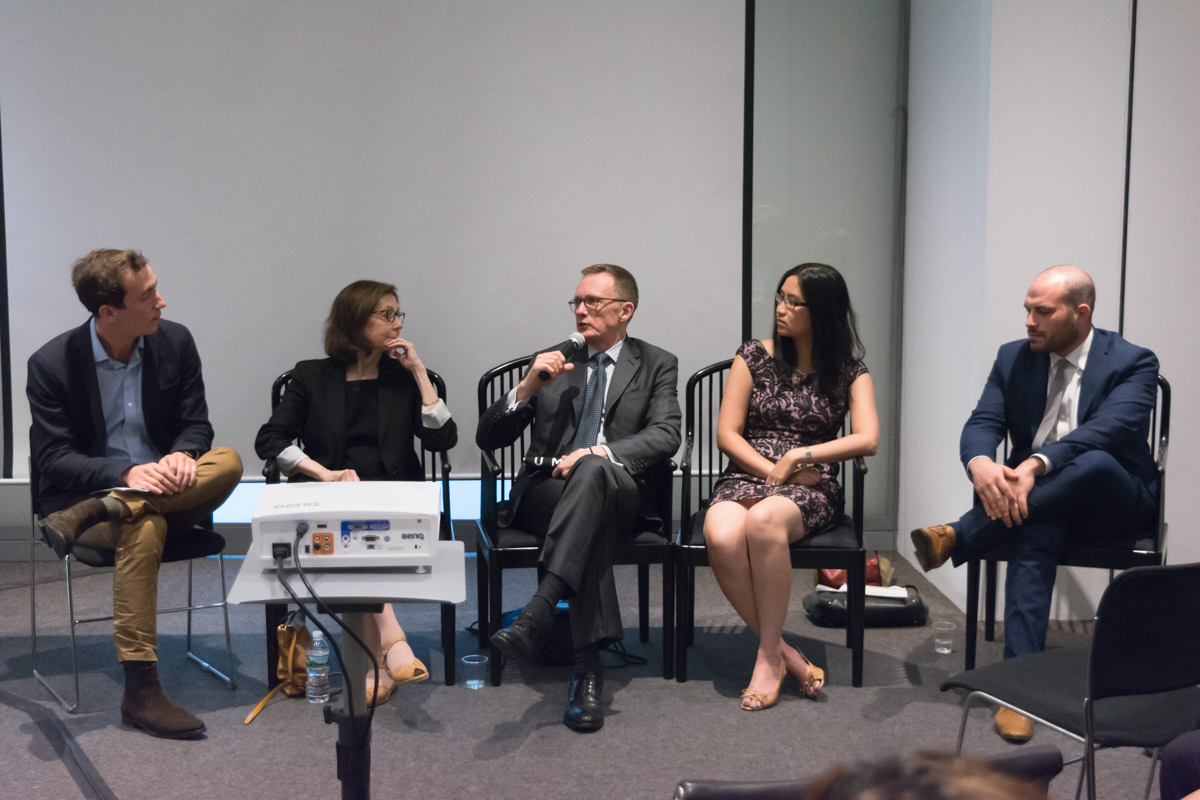 After the moderated conversation, our Fellows in the audience were able to get involved in the conversation. Key questions of concern were: How do we communicate the potential ROIs for projects? Can we expand the language we use to understand the long-term benefits? 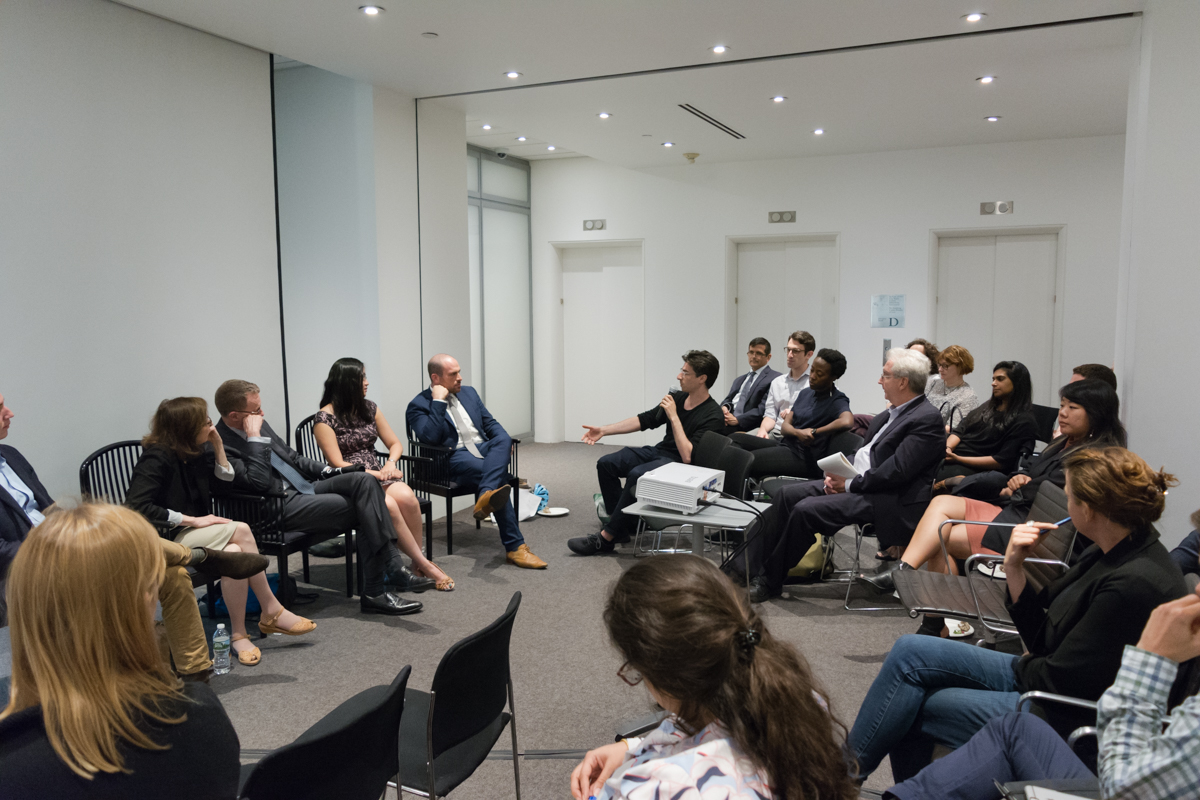 What are the positive and negatives to increasing the transparency of city data? Are these tools meant for city agencies or the public? 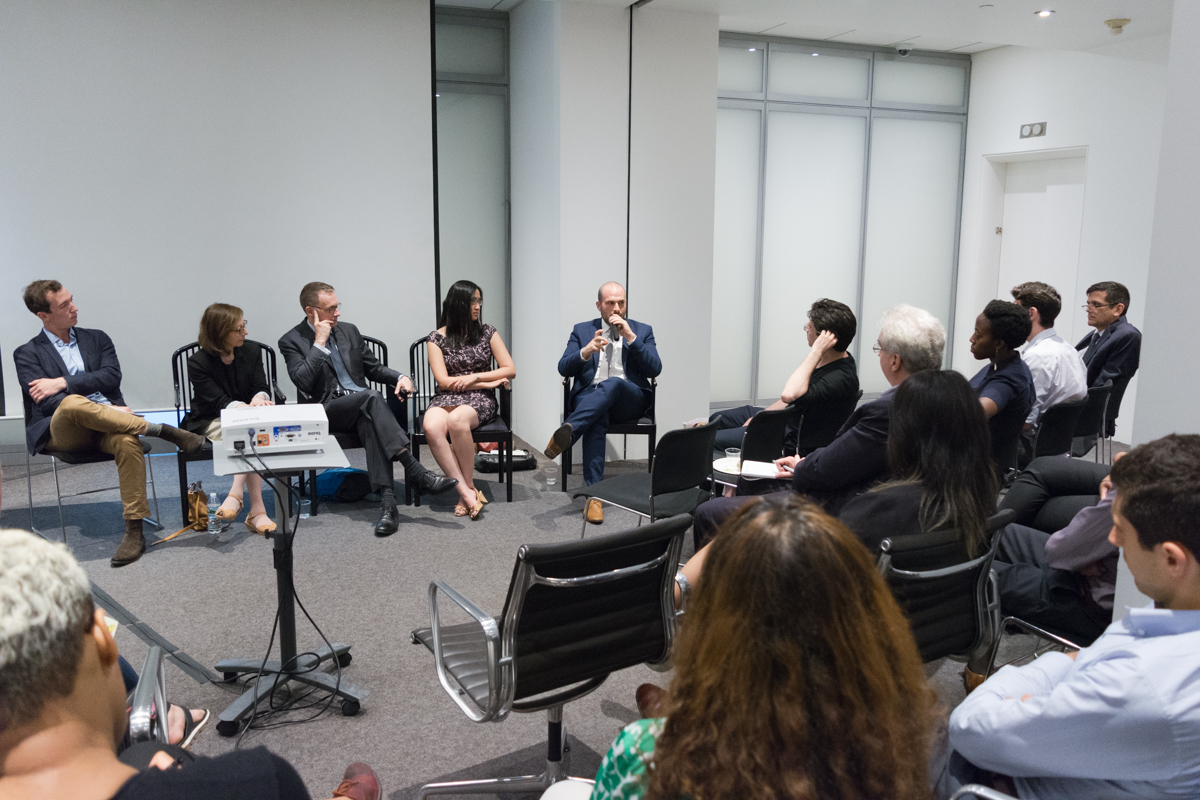 Does the current amount of projects in states of good repair feel like the right amount? Can New York City learn from other cities in how they handle and structure their budgets? 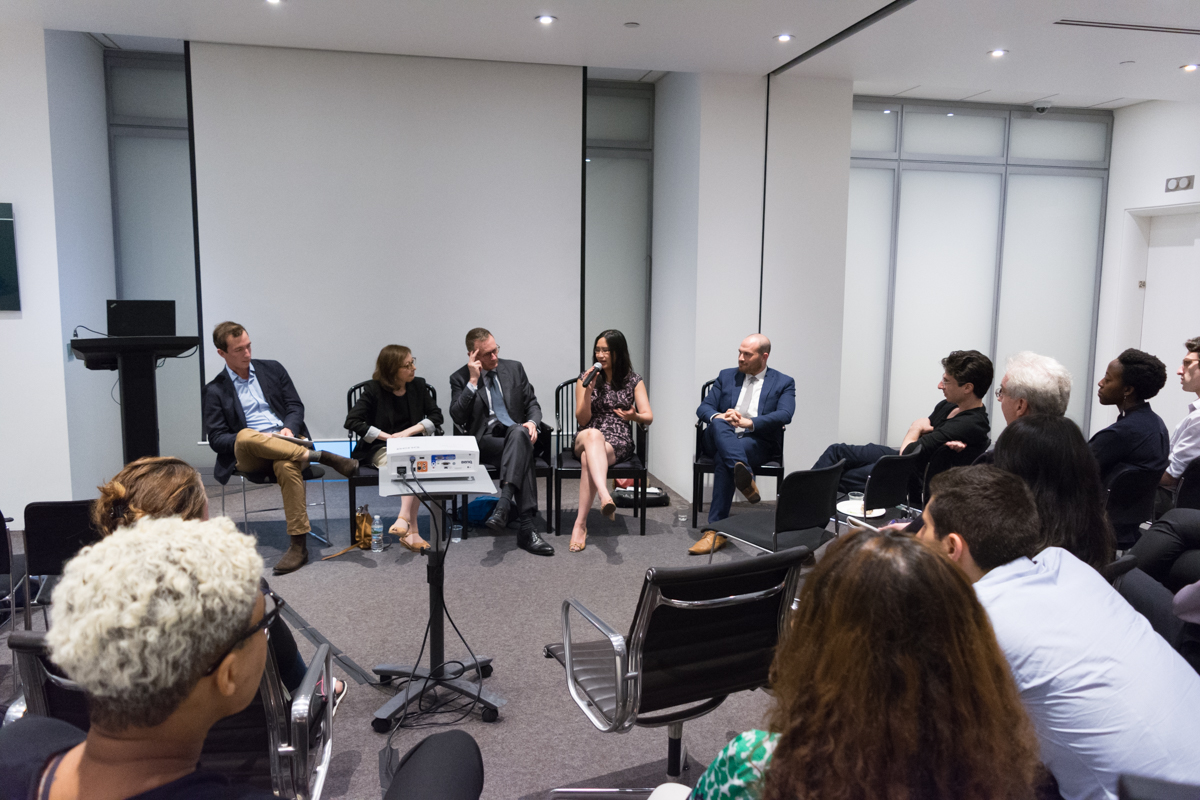 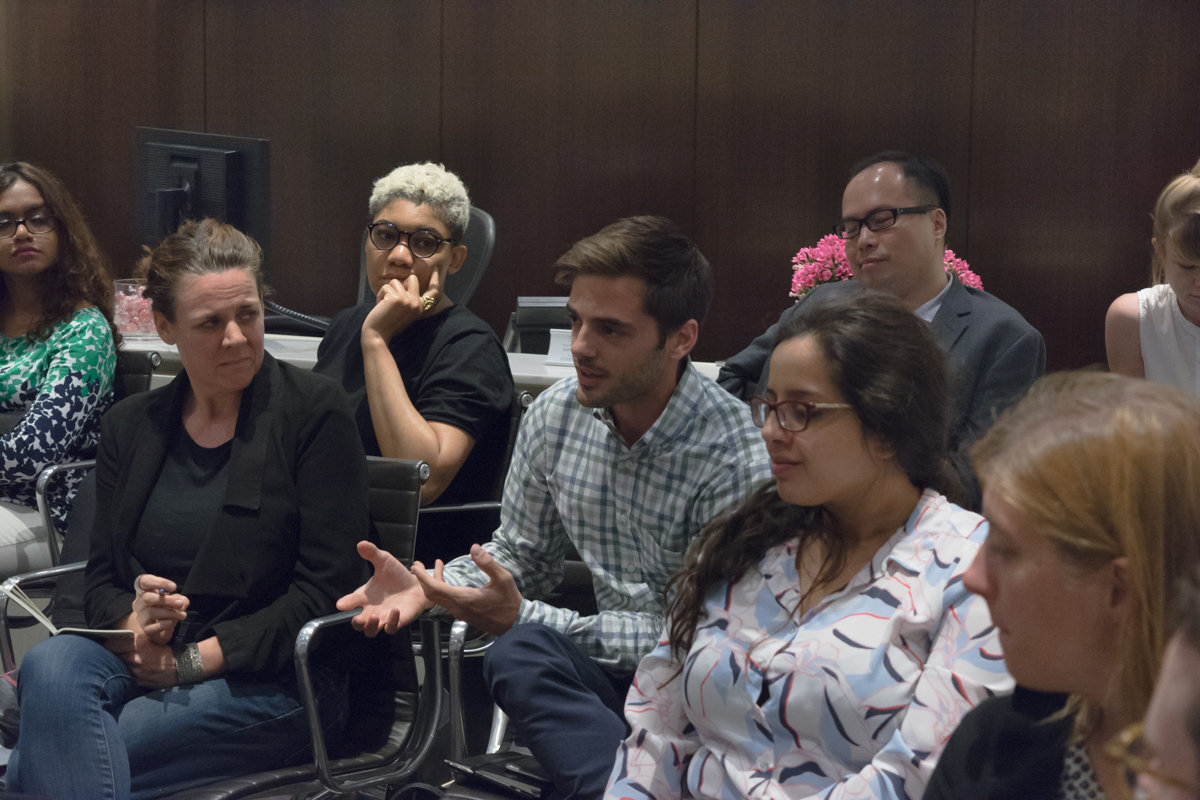