Building a Shared Vision: An Interview with Sandra Lobo 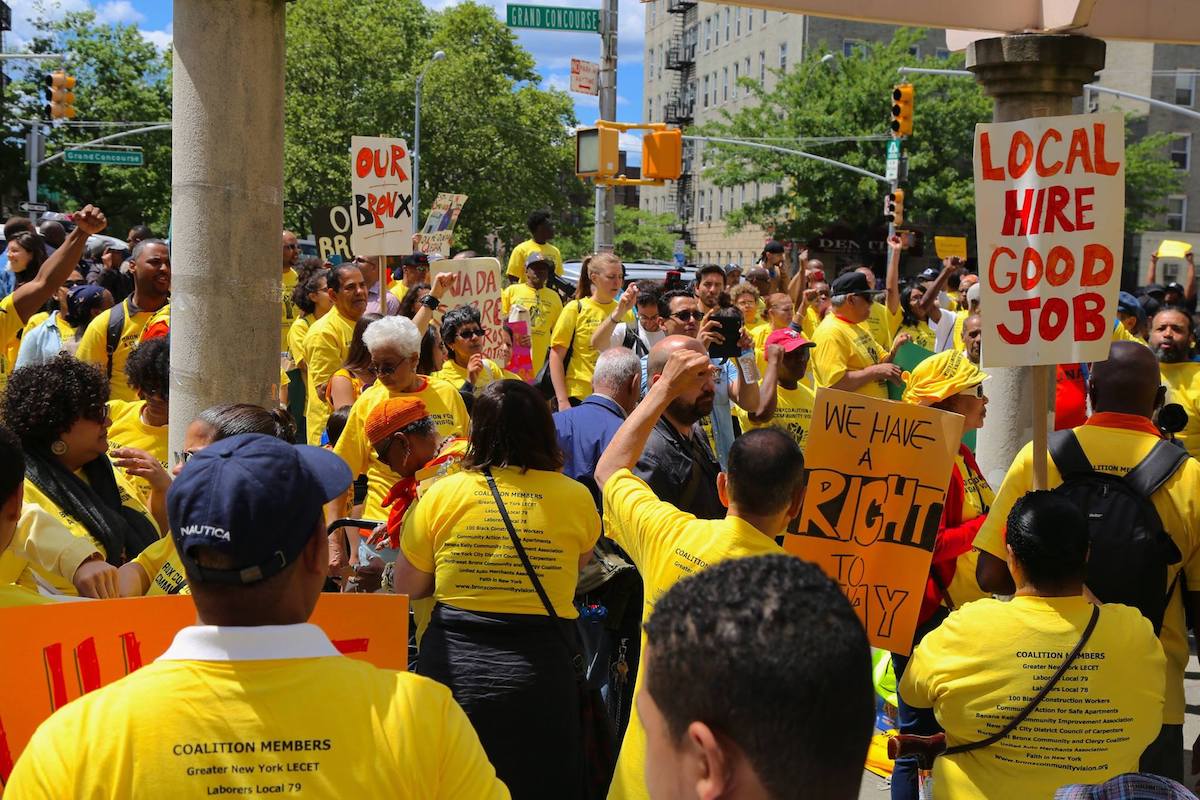 In the fall, the Urban Design Forum will launch Cooperative Works, an initiative exploring how New York City can advance economic justice in its coronavirus recovery. In partnership with Deputy Mayor for Strategic Policy Initiatives J. Phillip Thompson and the Mayor’s Office of M/WBE, our Fellows will conduct research on how to create economic opportunity for MWBEs and employee-owned businesses through climate investment, leveraging the new market for building energy retrofits created by Local Law 97.

Leading up to the program, we are pleased to publish a series of interviews with leaders in sustainability in the built environment, inclusive economic development, and racial justice. In our interview with Sandra Lobo, Executive Director of the Northwest Bronx Community and Clergy Coalition, we discuss how Northwest Bronx connects its organizing around racial, environmental, and health justice to an economic democracy framework that draws on longstanding cooperative practices in communities of color.

Katherine Sacco: For those who may not be familiar with economic democracy, could you explain what that concept is? How does economic democracy intersect with the racial justice work that you’re doing at Northwest Bronx Community and Clergy Coalition?

Sandra Lobo: I talk about economic democracy as a framework around building shared wealth and ownership, and collective governance over our community assets. There are obvious strategies, like a community land trust that we’ve incorporated, or cooperative enterprises included within this framework. There are other policy-based strategies that we’re employing as well.

Northwest Bronx has been organizing around really critical issues since 1974. Although we’ve used a variety of strategies, we have largely focused on a fight-back, defensive posture—fighting bad landlords, bad development, bad actors—rather than implementing our own vision. Economic democracy invited us to ask, what is the vision that we want to see, and how does that shape the organizing we do? What are we going to be fighting for?

When we went through the economic democracy training series developed by BCDI [Bronx Cooperative Development Initiative], we shifted our mission to explicitly name economic democracy as part of our mission as well as racial justice. Racial justice had always been a part of our analysis, but it had never been explicit. Given the changing landscape of the Bronx, we needed to name explicitly who was being most impacted and who was going to be at the center of decision making.

SL: The fight-back and fight-forward strategies need to be hand-in-hand. For example, the Bronx is experiencing serious displacement and gentrification pressures right now. To get at the root cause, we need to be building shared ownership of the buildings, the land, and businesses. At the same time, we know that it takes time to build that kind of infrastructure. If we’re not careful and we’re not also employing protective and defensive strategies right now, by the time we create shared wealth and ownership enterprises, our people might be gone. The things that we’re building may not be for the people who we intended it for.

The critical piece for us was acknowledging that if we didn’t intentionally create the capacity and the space to employ fight-forward strategies, we would always be focusing on the fight-back, because it feels like we’re under attack all the time and we have to defend and protect our people. If you don’t create the space, you’ll also never have actual time and capacity to do it. 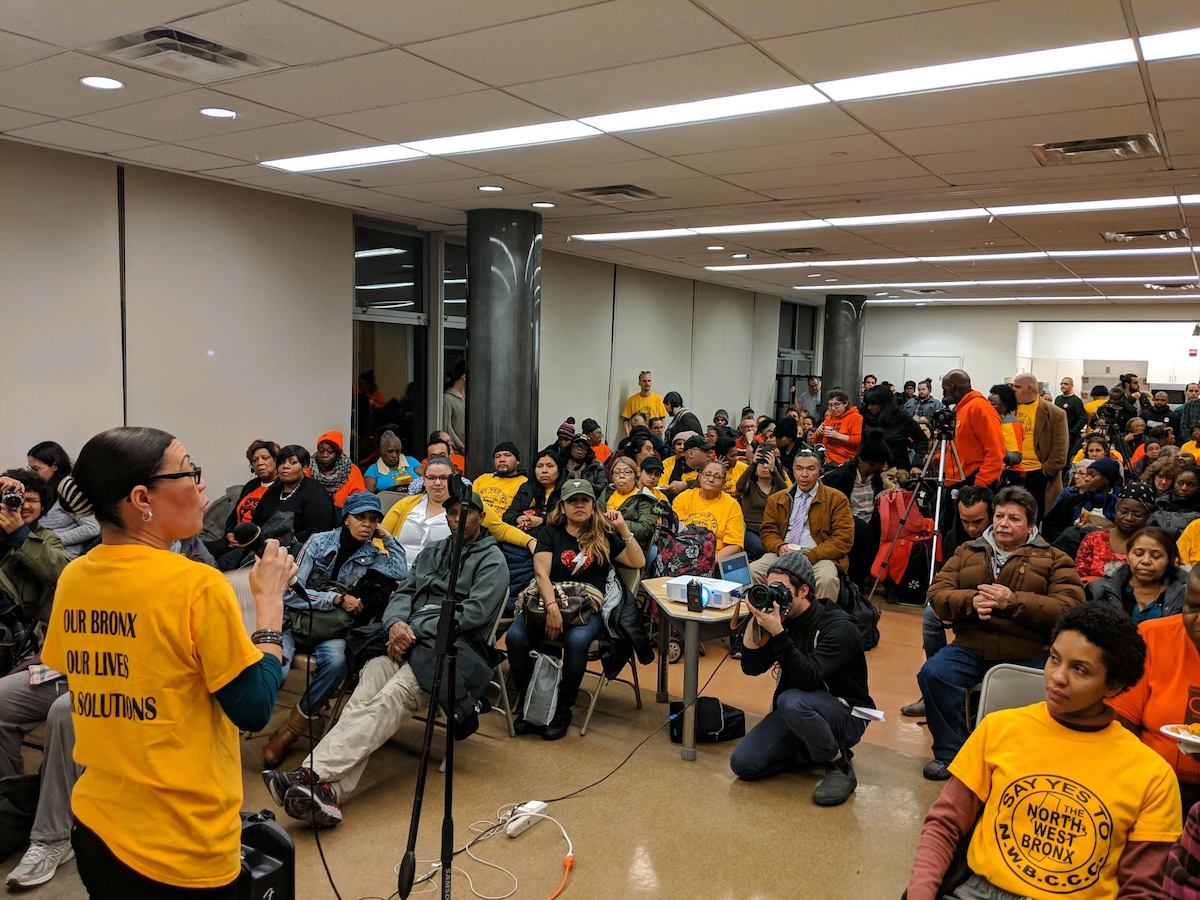 KS: I read that Northwest Bronx arrived at workforce development as a community priority through a participatory process that started by asking about the biggest health problem, which was identified as violence, and then invited ideas on how to address the problem of violence. Can you describe more of that process? How did that process change or shape the way you approach workforce development?

SL: We worked with the Department of Health and Mental Hygiene to engage in a participatory process to identify the number one health priority in our community. Over a year and a half, we engaged community members around the social determinants of health (SDOH). We are socialized to understand that if we are not healthy, that’s because we are not exercising or not eating right. Yet if you don’t have a grocery store with fresh fruits and vegetables, if you don’t have a space to exercise, or if you’re afraid to go outside to exercise, your health will be impacted.

Through the SDOH lens, participants understood why people were engaging in the underground economy that led to violence. They understood that there was a lack of opportunity, lack of access to jobs that actually made it possible for people to take care of their families. It was within this context that workforce development was identified as the root cause of why there was violence.

We ended up launching around Integrated Pest Management (IPM), which is the least sexy topic!

SL: Northwest Bronx has a 44-year-old Weatherization Assistance Program, the second largest in the state. During the former stimulus package, we received funding to train people for green jobs. The challenge for our community was that this investment came without an analysis around this sector at that time. We trained folks for green jobs, and at the end of the day, there were no businesses to employ them.

We can provide training programs, but if we lack the larger infrastructure of building up a sector, then you’re going to have trained workers jobless, or securing jobs that are outside the borough, with a larger corporation, where the profits and the revenue go to its leadership and the investors. That approach does not have the impact that we’re actually seeking.

“We want our people to have living wages, and we want our folks to be part of the decision-making at their workplace.”

Integrated Pest Management was one of the strategies that emerged from our Healthy Buildings work. It is an evidence-based intervention that gets at the root causes of asthma triggers. It was exciting to have the Asthma-Free Act passed in City Council, which requires landlords to use IPM for people who have chronic asthma. But there weren’t that many local businesses that could take on Integrated Pest Management (IPM). If we were going to create the demand for IPM, we needed a larger ecosystem that would support businesses to take on trainees.

For us, it wasn’t sufficient to have training for people in the community. We needed to identify a growing sector that also had a positive impact in our community. We want our people to have living wages, and we want our folks to be part of the decision-making at their workplace on the policies that impact the workers. The ideal for us is developing cooperative social enterprises or working with businesses that would be open to a conversion so that our workers share in the profits that they are producing.

KS: Northwest Bronx’s Healthy Buildings program aimed to address root causes of poor health outcomes by improving buildings, but also reduce greenhouse gas emissions, lower energy bills, and create jobs in the community. What has been the benefit of putting health concerns together with environmental concerns and jobs creation?

SL: After we went through the economic democracy training series with BCDI, our membership was really interested in organizing around health and energy, but they were really clear that we needed to be careful that we weren’t going to create benefit in one sector and potentially undermine other parts of our communities.

For example, with Healthy Buildings, were we going to implement energy efficiency retrofits that might ultimately displace our people because landlords could pass on the cost to low income tenants? No, we can’t do that. The financial tools that we use to address the energy retrofits have to be tied to a regulatory agreement that does not allow landlords to, for instance, pass down the debt to the tenants through what would traditionally be major capital improvements.

And when we’re doing energy efficiency retrofits, we work with the landlords to identify bids from local businesses and we work with BronXchange at BCDI to vet the businesses that have the capacity to take on that work.

When we first brought in more than 20 partners for the first planning of the program, every sector said, “This is too complicated! Why are you doing this?” Every sector is used to employing their own strategies within their sector. People are not used to sharing a vision and working collaboratively across sectors. It took two years of really building strong relationships. This took a lot of time, but for us it was really critical as we were committed to social transformation, not just impacting one sector.

KS: What kind of response have you seen when you engage your community around economic democracy and cooperative ownership, whether it is the anchor institutions contracting out jobs, the business who might be considering switching to this model, or workers themselves?

SL: Although we use the term economic democracy, some often used the “new economy”. But this approach is actually very old. Communities of color across the globe have developed cooperative economies to survive and flourish, including and especially Black communities in the U.S. It’s not a difficult concept for people to understand, in that communities have been accessing this tool all along. What has been missing is the infrastructure to provide credit and capital for these cooperative businesses of color to flourish. You might see cooperatives that are two or three people big, because they don’t have access to the technical assistance and the capital to grow.

“Communities of color across the globe have developed cooperative economies to survive and flourish, including and especially Black communities in the U.S.”

With our anchor partners and other institutional partners, they’re not resistant to the idea of cooperative enterprises, but they are worried that they are small, and just like any other small businesses, they ask if they can do the work or if they can show their experience and expertise. We are never going to get there if we don’t ever invest in them, so how do we begin to build the infrastructure that can help them flourish over time?

KS: As we look towards the economic recovery from the coronavirus pandemic, what role can worker cooperatives play?

SL: Right now, we’re thinking about cooperative ownership not just in terms of worker cooperatives, but also housing cooperatives and shared governance over different assets in the community. Given that a lot of our folks are unemployed at home right now, how might this be an opportunity for training and leadership development so that when we’re coming out of this, we can invest in people who are ready to hit the ground?

The small businesses in the Bronx have been completely decimated by this. The Bronx received 3% of the PPP loans from the stimulus package, and less than 1% from New York City’s Small Business Services fund. That doesn’t make any sense to us. We have been in conversations with our small businesses about, rather than closing, taking this opportunity to actually rethink their business in a different way, with other business owners as well, that might shift their approach to coming back after the quarantine is lifted.

Sandra Lobo is the Executive Director of the Northwest Bronx Community & Clergy Coalition, a 42-year-old grassroots, member-led community organization that unites diverse people and institutions to work for racial and economic justice.