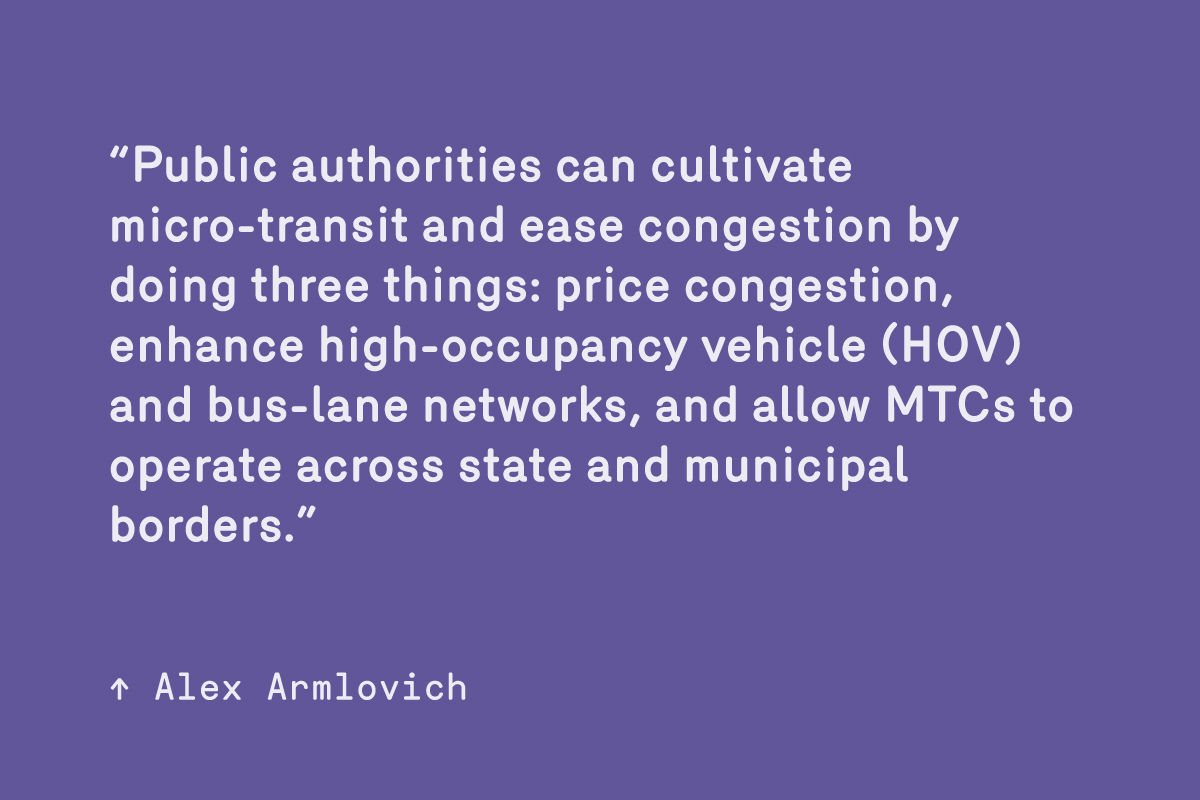 Falling bus speeds and surging ridesharing platforms have led to a 16% collapse in New York City’s bus ridership since 2002. New “micro-transit companies” (MTCs) like Chariot and Via could help by providing app-hailed bus routes that respond to where riders want to go.

For-profit transit is not radical; shuttle buses and vans run by universities, employers, and developers are already ubiquitous. “Dollar van” jitneys serve transit deserts in the outer boroughs and provide express connections between the Chinatowns in Manhattan, Sunset Park and Flushing for some 110,000 weekday trips. MTCs could unify existing networks without compromising the direct, limited-stop connections passengers crave.

MIT researchers found that 2,000 10-passenger minibuses could serve 95% of the Manhattan trips now performed by 14,000 yellow cabs with a mere three-minute average wait time. Those numbers were achieved by “snapping” destinations and origins to their nearest cross-streets. Matching riders to the same address at the same time is rare—but getting within a couple blocks is easy. Cross-street service is the secret sauce for cheap and quick carpools by Via, a nascent MTC in New York, Chicago, and DC.

The MTA should also competitively outsource infrequent, low-ridership routes (15 minutes or more between buses) to MTCs. Express commuter buses are particularly attractive. Today, express buses come into the city and park, or “dead-head” empty back through bridges and tunnels. can i buy ivermectin in the uk Their cost per hour of actual service is a mind-blowing $419, roughly four times the cost of operating a Chariot minibus. Our $6.50 express bus fare may seem high, but the invisible $13 subsidy per rider is the real budget-buster.

An ideal network would outsource express buses to MTCs to create a hybrid of express and local service. le pillole mectizan

Private microtransit, in concert with congestion pricing and public Bus Rapid Transit, is the greatest opportunity to fix our bus crisis.

In the AM, microtransit would follow fixed express routes from all over the metro area into Manhattan, before roaming around the five boroughs in popup bus service. ivermectina 6 mg gotas para que sirve In the PM peak, many buses would return out on their AM express routes. By using buses all day, MTCs could radically reduce public subsidies for express buses while providing an affordable transit option inside the city.

American cities have been too slow to invest in congestion management and legacy bus systems. Still, the emergence of MTCs is reason for optimism: operational savings and revenue-neutral service improvements provide a strong political incentive for reform. The ultrasubsidized yet underutilized commuter express bus and the slow and infrequent local bus should be permanently replaced by private MTCs.

Alex Armlovich is an adjunct fellow at the Manhattan Institute, where he writes primarily on urban issues such as housing, transportation and infrastructure. His articles have appeared in the New York Daily News, New York Post, U.S. News & World Report, Washington Examiner, and City Journal.