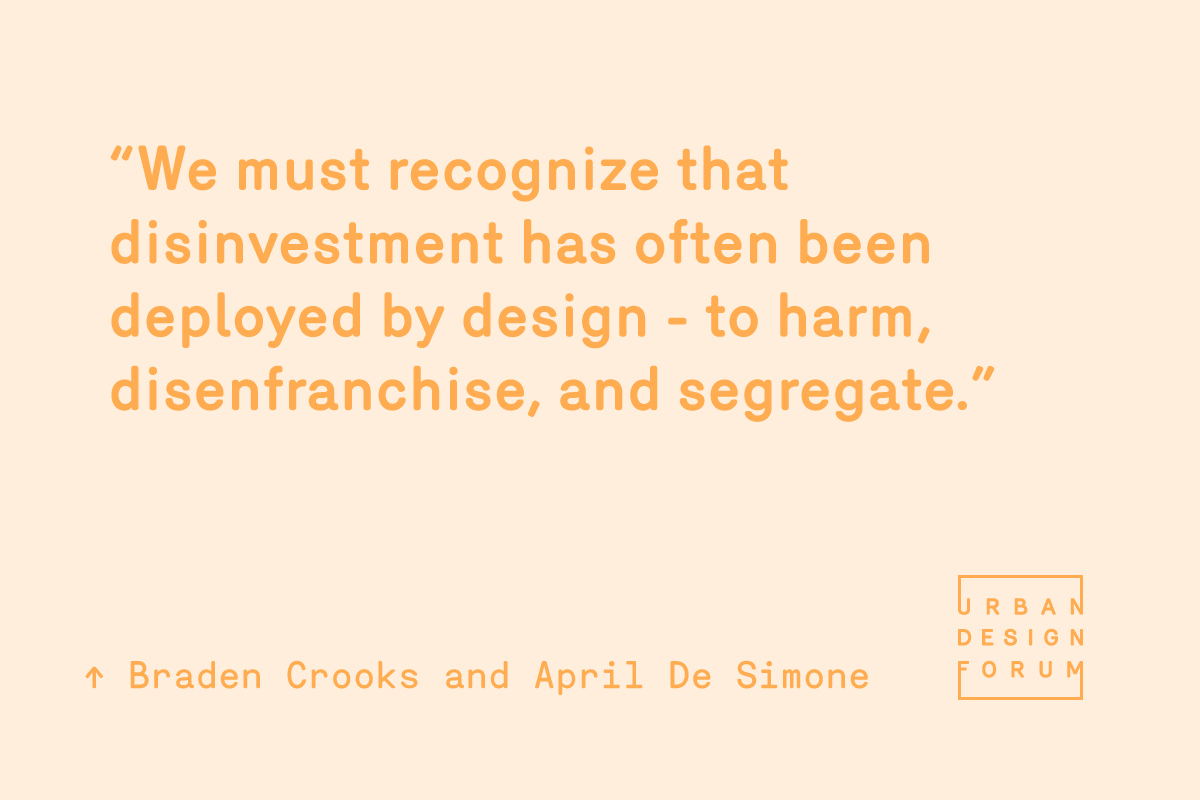 In the wake of the Great Depression, the Federal Government rolled out the New Deal and created the American middle class as we know it. The only catch? This opportunity would be deliberately reserved for White families. Through various channels, Jim Crow racism would be designed into new systems that would build wealth and bolster the livelihoods of many Americans. None of these racist systems was more powerful or consequential than Redlining.

It is difficult to understate the impact of Redlining, along with the mentality and practices behind it, on the American geography. Redlining was a process used to map every city in America in the 1930s. Two hundred and thirty-nine maps laid out which areas should receive investment and which areas, colored in red, were too “hazardous” to receive federally backed home loans.

While this granted some places and people access to the new American Dream of home ownership, other areas were slated for disinvestment—exacerbated as the practice of Redlining spread from home loans to business loans, insurance, and even bank branch locations. These places became cut off.

But why zone an area Red, and doom it to decline? The maps tell us. In the area descriptions for many red zones is the language, “Hazardous Influences: Negro Infiltration.”

The descriptor “hazardous populations and social groups” was especially targeted toward Black people, but also included Hispanic, Asian, and Jewish communities, as well as “Foreign Born Elements” such as Italian and Polish immigrants. The maps tracked the “infiltration” and “invasion” of certain people. After World War II, some of these populations assimilated to become White, but the language in these documents and the targeting of immigrants and people of color is all too familiar in 2019.

As time went on, many neighborhoods in American cities declined and increasingly became zones of concentrated poverty and dilapidated infrastructure. Meanwhile, in areas deemed suitable for loans, wealth flourished. But what makes an area “green” on the map and therefore low risk and ripe for investment? These areas had “restrictions on hazardous infiltration,” meaning they had racial covenants declaring the area Whites only. The Federal Government deemed this a good thing because it “preserves the value of the neighborhood.”

Though some areas in cities were zoned green, many were suburban places and new developments that could wall themselves off to just Whites. What this means is, over time, the practice of Redlining would produce the American structural geography that we are so familiar with across most cities: concentrated areas of poverty in cities with mostly people of color, and much wealthier, Whiter suburbs surrounding them. And so Redlining took us from the explicit racism of the Jim Crow era into the structural racism of today, which is designed into the very landscape of the Nation.

As suburbs grew, highways were built through urban neighborhoods to serve the residents of these suburbs. While the middle class passed on wealth gained through home ownership, other neighborhoods grappled with blight, abandonment, and fires. Schools were defunded, infrastructure left to rot, unemployment skyrocketed, and policies like Broken Windows Policing were enforced to deal with the fallout, leading to Mass Incarceration.

To understand the toll of this deliberate disinvestment, we need look no further than the neighborhood our co-author, April, experienced growing up. The Tremont section of the Bronx knows this story intimately. Redlining, the Cross Bronx Expressway, the “planned shrinkage” and destruction of the Third Avenue subway line, and terrible fires all ravaged the neighborhood. The heroin epidemic, the HIV/AIDS epidemic, crack and epidemic violence followed. Redlining not only dramatically altered the social infrastructure of daily life—in many places it nearly obliterated it.

When April’s mother bought a home in Tremont she was working two jobs and believed she had bought into the American dream. She was going to build a life for her family, but in the absence of typical home mortgages was forced to purchase an exploitative “contract buy,” in which a single late payment can nullify any equity while inflating interest rates—often bankrupting families. The block eventually burned, leaving their home—now worthless and badly damaged—the only one standing. Heroin, violence, and mental illness were all around them.

How does a family survive such an experience? How do we reconcile this history with the ideals of our Democracy? The trauma is still fresh and reverberates across society. Meanwhile, in many once-Redlined neighborhoods, gentrification is causing new waves of displacement and disruption to that same social infrastructure.

Infrastructure is a tool, and so is disinvestment. We must recognize that disinvestment has often been deployed by design—to harm, disenfranchise, and segregate. These design decisions remain baked into the landscape. It is the structural geography of America. Designed disinvestment guides this geography and then this disruption manifests in the social infrastructure that keeps society from falling apart. To Undesign Redlining, we must heal both people and places.

This healing is urgent work that goes well beyond popular symptomatic responses. By ameliorating the effects of deeper systems, we are often simply maintaining those systems. A regenerative approach that goes beyond maintenance is needed.

How do we bring investment back into a Redlined community in ways that begin to heal the wealth destruction left in its wake? Private investment follows public investment, and if a community has no way to capture that wealth and feed it back into the neighborhood from the ground up, planned improvements to neighborhoods will be met with fear of gentrification. This is why co-ownership models like Community Land Trusts (CLTs), cooperatives, social enterprises, commons, and crowd equity have increased in popularity. As connective infrastructure, these can maintain a sort of community-based, regenerative safety net.

How do we develop communities from the ground up, with the participation of everyone? As it stands, communities often feel the only way to have agency in their own development is through opposition. We need human-centered design capacities and the social infrastructure for a process of ground-up development that can unleash their creativity. This is why democratic systems of design and local decision making are growing across the country: accessible in on-the-ground community hubs, through technology and public process. Communities want to drive their own maintenance, regeneration, and evolution.

How do we center shared values and rights in our collective intentionality and decision making? The road to hell is paved with good intentions that lack a clear understanding of the problems they are trying to solve and the effects of their solutions. Community mapping, popular education, data collection and engagement are treated as project-by-project checkboxes, instead of a living—vital, even—civic process for understanding what is needed and what is possible. Instead, a living memory and a values-driven approach to our social contract leads us to understand and connect to one another, creating a culture of conflict resolution and self evaluation.

We believe that ecosystem building is the opposite of Redlining. If Redlining was about dividing people and devaluing them, then undesigning Redlining will take building connections that produce shared value. Disparate organizations and sectors are often trying to build a foundation with bricks and no mortar, often wondering why bricks won’t do what mortar can. The connective infrastructure of gathering spaces, co-ownership, participatory engagement and design, digital tools, popular education and a culture of shared value needs to be built and maintained before large-scale investments pour into our neighborhoods like Tremont. This early, slower investment in people will launch equitable economic and social returns downstream. A focus on projects ignores this, and has left the human infrastructure we have described either starved of resources or nonexistent.

The systems that created the divided American landscape continue to loom large. They operate everywhere, not just in Redlined places. Wealth has become for the few, decision making is top-down, and shared values seem quaint instead of vital. The topic of maintaining our systems and places will remain locked in this context until the infrastructure for wealth, design and values are regenerated. Without a clear intention and understanding of our historic, race-driven decision making, and by focusing on our own corners and not the bigger picture, we fail in our attempts to promote sustainable and equitable community development. The stakes are high. It’s time we take seriously the task of Undesigning Redlining.

Braden Crooks and April De Simone are co-founders and partners of designing the WE, a for-benefit design studio positioned within the fields of social innovation and community driven social, cultural, and economic development. Braden is a gardener turned landscape architect who entered into the fray of community organizing and advocacy. April has over 15 years of experience in strategically designing, developing and launching for-profit, non-profit and government projects.