Cooperatives in Construction: An Interview with Rebecca Lurie 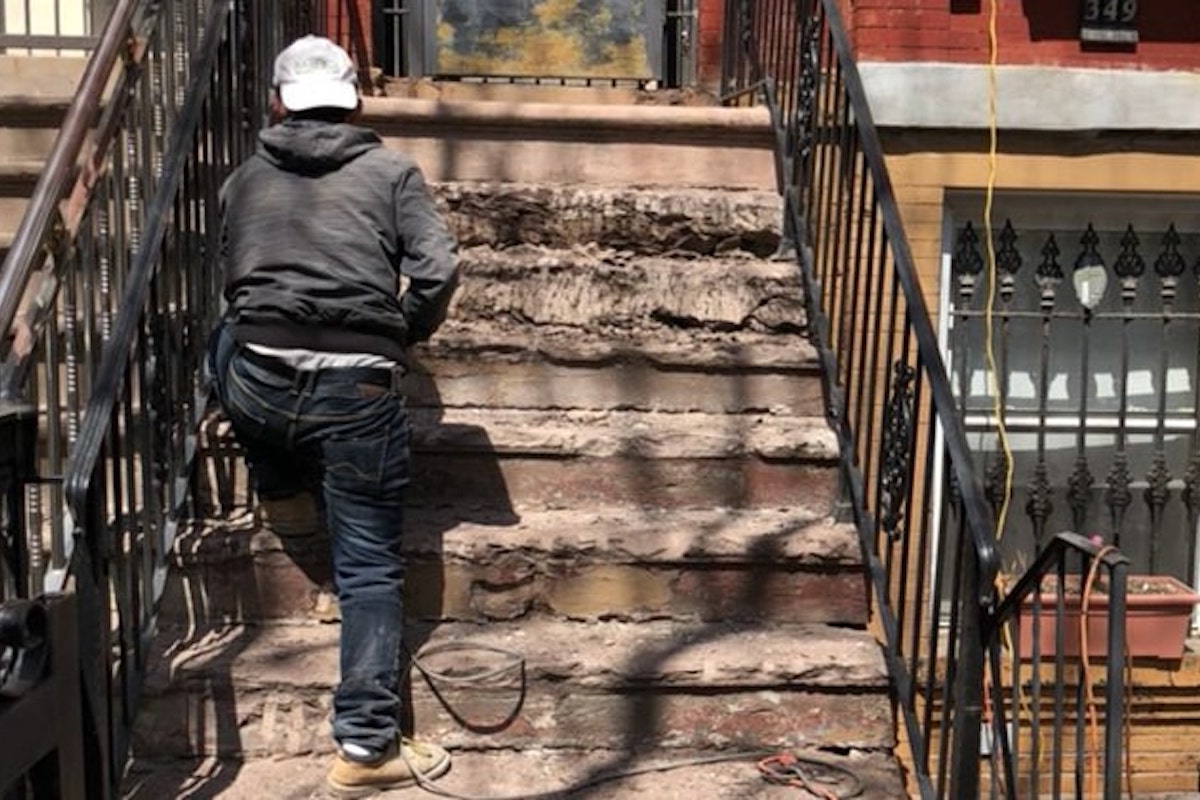 This fall, the Urban Design Forum is launching Cooperative Works, an initiative exploring how New York City can advance economic justice in its coronavirus recovery. In partnership with Deputy Mayor for Strategic Policy Initiatives J. Phillip Thompson and the Mayor’s Office of M/WBE, our Fellows will conduct research on how to create economic opportunity for MWBEs and employee-owned businesses through climate investment, leveraging the new market for building energy retrofits created by Local Law 97.

Leading up to the program, we are pleased to publish a series of interviews with leaders in sustainability in the built environment, inclusive economic development, and racial justice. In our interview with Rebecca Lurie, Coordinator of the Community & Worker Ownership Project at the CUNY School of Labor and Urban Studies, we discuss building infrastructure for small cooperatives, opportunities to strengthen the cooperative movement in the construction industry, and how cooperatives pay it forward.

Katherine Sacco: How did you get involved with working in cooperative models and equitable economic development?

Rebecca Lurie: After college, I was offered a job by a cooperative that did delivery to food coops in the Northeast. They were expanding into a new warehouse, and when they put the job out for bid for a contractor, they required that whoever got the job hired and trained a woman or “minority.” So, I became a carpenter because a business that was cooperatively owned and run decided that when they spent their development dollars to renovate, they also wanted to have some efficacy for people of color or a woman.

I became a carpenter for a very small company in upstate New York. A few years later, I applied to the union upstate and became an apprentice in the carpenters union. My first career was as a union carpenter, which I did for about ten more years. Then I started doing training and education for the union, writing grants, and paying attention to opportunity and access issues, like pre-apprenticeship programs and access to the trades.

Around 2008, there was money available as part of the Recovery Act to do green jobs, energy efficiency, and sustainability, and I got involved in that work.

For the past six or seven years, the city has put money towards coop development. I moved to the City University of New York at the School of Labor and Urban Studies, where I started a project called Community and Worker Ownership Project. We’re putting together a curriculum and trying to support the cooperative movement in any way we can at university level. This movement is about a just and economically equitable system that might take us more towards economic democracy, and away from a capitalism that is hierarchical and gives preference to the few at the top.

Then, I said “yes” to some old friends who I did construction with in the ‘80s, and we started a coop called New Deal Home Improvement, which was targeted to the home improvement sector. It helped me understand this whole market of people who work outside of the union or contested non-union spaces of commercial construction and affordable housing. The home improvement market is just a sliver of the construction market, but a lot of people in their homes need things fixed.

This movement is about a just and economically equitable system that might take us more towards economic democracy, and away from a capitalism that is hierarchical and gives preference to the few at the top.

KS: What where some of the learnings you took away from New Deal Home Improvement?

RL: New Deal Home Improvement has suffered in the home improvement market. We identified a number of problems for ourselves as a small company after three years, issues like a strong back office, marketing, business development.

We’re in the process of closing down fully, but in the interim, we got funded by the Workers Lab for a project called City Roots Contractors Guild. The idea is that the problems we faced are probably very common to any small groups trying to be in this market. A robust organization always has a back office, but if you’re strapping on your tools and going with your van to do work, you might not have the ability at the end of the day to pay attention to all the billing, invoicing, paying attention to the regulations. Can we help solve these problems collectively? We hope to provide that.

When I was working for New Deal and driving around, I saw this engine of tradespeople in the outer boroughs all the time, from eight to five. I tried to understand how those small businesses function. A lot of people rush home at the end of the day to do some paperwork. When I spoke to some of my business colleagues, I found that if they were able to afford someone back at the office— a secretary, receptionist, bookkeeper—and put that into their financial model, they were doing better.

The jury is still out on what we are designing with City Roots Contractors Guild. But we are talking to businesses, seeing if they can afford us, and explaining to them that even though there’s a cost to those back-office services, we think that cost is much less than hiring a full-time person.

KS: How does a racial justice framework shape the work that you are doing to support cooperative models?

Everybody is happy to get to work, and in their circle, nobody cares about taxes or workers comp. That is an economic engine for people in that community, and it’s vital. But this model concerns me. We’ve learned that sometimes when you rush work, you might sacrifice safety or quality, or people might not have the right skills. We’re hearing a lot of people say they want training for themselves and their workers, that they’re hired to do a good job but they don’t know how to do a good job, and may be learning it on YouTube at night.

How do we strengthen this sliver of the market, and build a model in which everybody can work in their own neighborhood to make their community stronger? My vision for this market to be vital in every community.

KS: What are particular challenges or opportunities you would expect with building cooperatives in the part of the construction industry that Local Law 97 targets, which is energy efficiency retrofits for the city’s largest buildings?

RL: I don’t see the coops as they are currently sized as a solution here. But looking at businesses that are privately owned and looking at owners that are aging out, there’s a movement within the economic democracy movement to help businesses convert to cooperative ownership.

How do we strengthen this sliver of the market, and build a model in which everybody can work in their own neighborhood to make their community stronger?

The old world of community wealth building was a union job with good pay, pension, annuity, health insurance, training. Another paradigm of wealth building is ownership and control. With some companies, for instance, if the owner is ready to retire, could they consider selling to the workers rather than the next biggest company?

KS: Are there particular barriers to meeting the occupational training requirements for worker cooperatives or particular strategies that you’ve identified to strengthen training?

RL: Cooperatives are small right now. Training happens in big spaces, with union-affiliated companies; with large companies who can afford to pull people out for a day here or there for their training; or at universities where people might pay for their training. If you don’t have enough nickels to rub together, you’re learning on the job. Without training, you learn from your mistakes, which means you’re making mistakes and they cost you money. 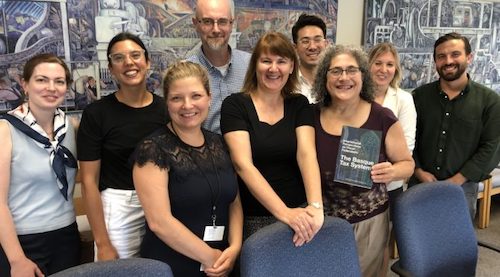 CUNY’s Community and Worker Ownership Project brings together collaborators from around the world working in cooperative ownership. Image credit: CUNY School of Labor and Urban Studies.

How do you get the smaller companies trained? The unions are doing all this training just for their members. How do you think about membership more broadly? There’s not an easy way to figure out the training. We’re looking at it now because through City Roots Contractors Guild, we want to make that available to some of the smaller companies, and it’s part of what they’re asking for. But we’re having trouble finding the right lab in New York City. Having worked with apprenticeship, I know that certified apprenticeship means two things: it means you get classroom training, like in a shop, and you get on-the-job training that’s guaranteed by the employer. It’s a great model, but it’s hard to figure out how to put that into a small company because it requires an investment of dollars, too.

KS: What role do unions play in a vision for a future with flourishing cooperative ownership?

RL: I’m very active in the Union-Coop Council of the US Federation of Worker Coops, which has people from all over the country who are unionists involved in coops. There’s a natural alignment, but people don’t always see it. They see it as either/or.

The either/or model is because we come out of a union movement that was very tied to an employer at the bargaining table to fight for rights, not a labor movement to own the means of production. If unionists can see that we might be able to shift to owning and controlling the work, it would be a very different model.

Rebecca Lurie is on faculty with the Urban Studies Department and the founder of the Community and Worker Ownership Project at the City University of NY School for Labor and Urban Studies. She is a founding member of the worker-owned cooperative, New Deal Home Improvement Company. She began her working career as a union carpenter and transitioned into worker education through the union’s apprenticeship program and the construction industry. Using a sector approach for understanding industries and businesses and their employment needs, she has remained dedicated to inclusive community economic development. Rebecca has collaborated on numerous initiatives in NYC, including pre-apprenticeship programs, a Bronx green jobs network, a kitchen business incubator and the design of Best for NYC. She serves on the boards of the Bronx Cooperative Development Initiative and Democracy at Work Institute. She is Trustee Emerita with the Brooklyn Society for Ethical Culture. She holds a Master’s in Organizational Change Management from The New School, a certificate in Adult Occupational Education from CUNY and is certified in Permaculture Urban Design. She is a native New Yorker raised with the spirit and passion of dedication to social justice.