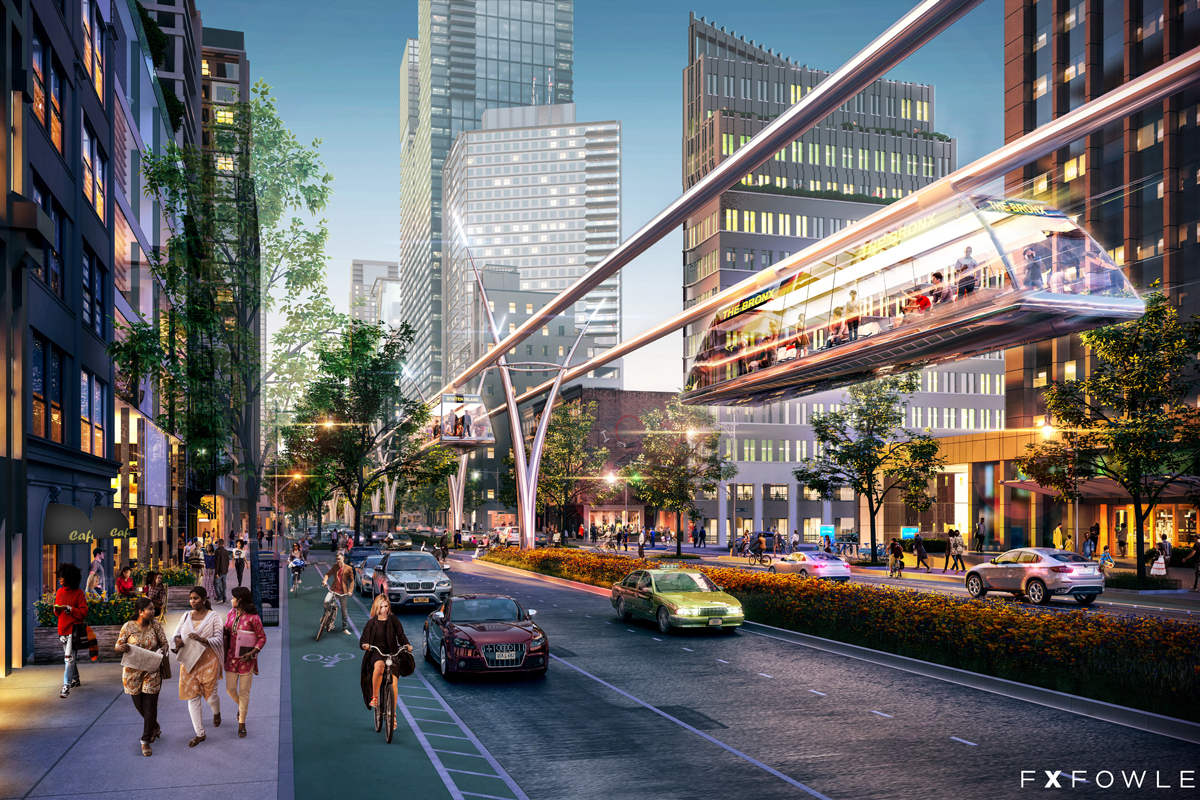 New York City’s current subway and transit routes were developed in the early 1900s on a hub-and-spoke model that connected the central commercial area to the surrounding residential boroughs. That model no longer fits the way our city works. Over the next 25 years, 83% of the city’s expected 800,000 new residents will settle in Brooklyn, the Bronx, or Queens.1 Workers will travel to job centers in all five boroughs. We need to expand our existing transit system to provide better access to the areas of our city that already have the capacity to accommodate this additional growth and density.

New York City must strengthen our existing transit system beyond the Manhattan core to catalyze the untapped potential for development in underserved neighborhoods. We should invest in new, next-generation, elevated transit—the Halo Line—to serve all New Yorkers and build a strong future.

We propose the Halo Line: a fifty-seven mile long loop that connects all five boroughs as well as five counties in eastern New Jersey. While some planners advocate a multi-centered model for our future transit system, we think it is better to build on what we already have. The Halo Line would transform our existing hub-and-spoke model into a hub-spoke-and-wheel system that integrates eastern New Jersey and brings transit service to under-served neighborhoods across the city.

The route would serve twenty-nine stops—spaced about two miles apart—with express-style service, offering convenient connections to 22 other lines including most subway and PATH trains, the Hudson Bergen Light Rail, the Staten Island Ferry, the Staten Island Railroad, and the future BQX Streetcar. This one line would link burgeoning neighborhoods like East New York with the existing and emerging job centers of Hunts Point and Sunset Park, offer a direct connection to LaGuardia airport and a redeveloped Rikers Island, reconnect neighborhoods on both sides of the Cross Bronx Expressway, complement local rail service in Eastern New Jersey, and re-establish a transit link along the North Shore of Staten Island.

All of this could be achieved with a lightweight aerial tram gliding above our existing streets and railways. The Halo Line would minimize its physical footprint and maximize the speed and convenience of its service by perching on vertical supports, descending to ground level only for stops, and attaching to existing bridges to cross rivers. This would ensure minimal interference with present traffic patterns, and continued operation during flood situations.

The Halo Line is a long-term vision for New York City’s transportation infrastructure that represents an important shift in how we think about serving our city. The Halo Line enables the growth of new and existing communities, creates new centers for urban life, and catalyzes new development opportunities.

Jack Robbins is a Principal at FXCollaborative. An accomplished architect and urban designer, Jack believes in the transformative power of collaborative design and innovation to improve our cities. His design-oriented approach generates insightful solutions to complex urban challenges for both public and private clients, and builds vibrant, sustainable cities.