Caring for Our City 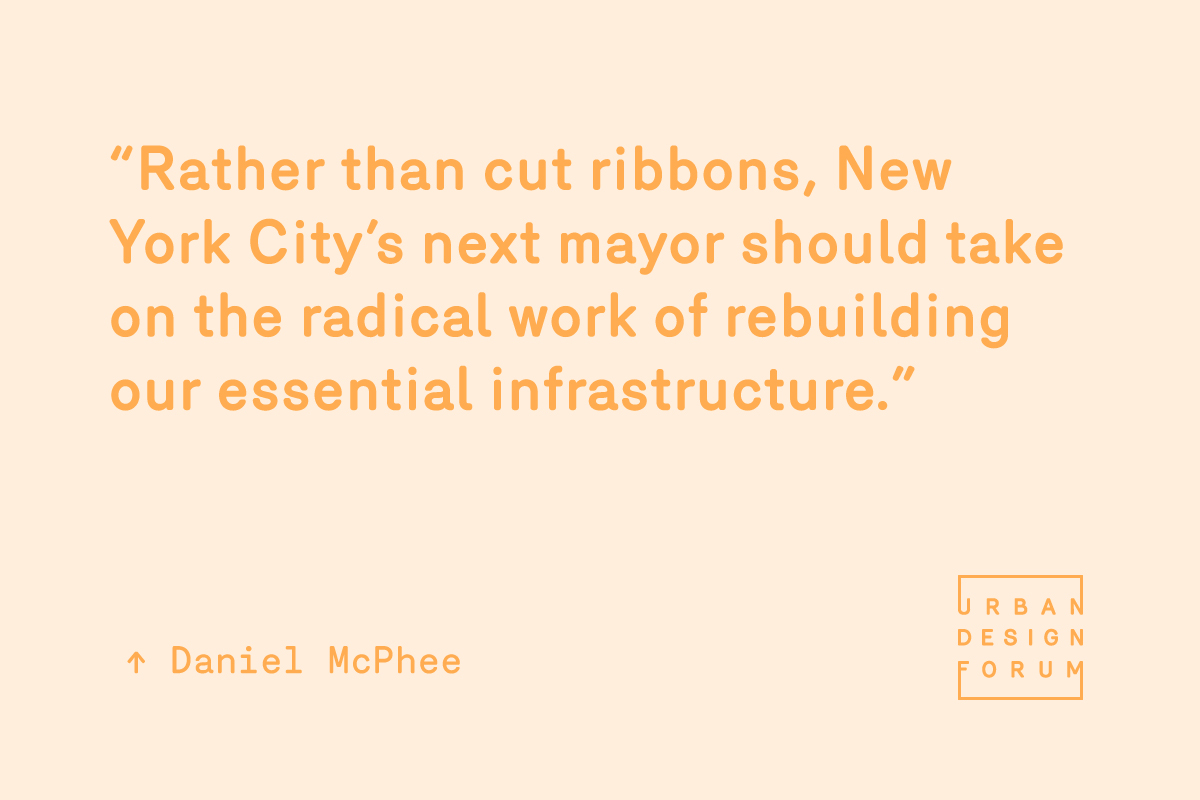 Rather than cut ribbons, New York City’s next mayor should take on the radical work of rebuilding our essential infrastructure.

The most daunting challenge facing our city today is not what to build, but what to restore. Our subway system is in crisis, our public housing is collapsing, and our major roadways are crumbling. We have let decades of disinvestment and unaccountable leadership threaten the very systems that keep New York City humming. And worse, our terrible track record on infrastructure has undermined the public’s confidence and kept the City from bravely building open space, public transit, and social housing for the next generation of New Yorkers.

We need to correct our short-sightedness and fix our city’s broken culture of maintenance. The institutions that manage our public realm are too narrow, too unequal, and too undemocratic. If we aspire to serve not only the affluent, but the average New Yorker, it will require true political leadership, reform of our city stewards, compassionate design and engineering, and a voter base unwilling to accept the status quo.

It’s hard to believe that four decades later the culture of New York City’s 1970s fiscal crisis is still sown into the landscape of the city. Civic heroes created conservancies and business improvement districts to rescue Central Park and Grand Central Terminal through private and corporate philanthropy. Their runaway success rippled to open spaces and commercial corridors across Manhattan and wealthy corners of Brooklyn and Queens. At last count, the City boasted 76 business improvement districts and dozens of parks conservancies and preservation groups.

These institutions–which often just focus on a single park, landmark, or commercial strip–miss the forest for the trees. The remainder of the city–everyday streetscapes, parks, storefronts, and landmarks–fall victim to underinvestment and lack of stewardship. (Not to mention that many of these institutions are governed by impacted businesses and funded by private philanthropy, rather than neighboring residents. if i swab ivermectin paste for horses in my cats ears will it get rid of ear mites? ) Philanthropy can still support the public realm, but with our city in a new golden age, it’s time to reform our nonprofit stewards.

Stewards: let’s take a more regional view. Why shouldn’t conservancies support parks across an entire borough? Why not recharter business improvement districts to cover an entire community board? Couldn’t we bank development rights to support landmarks across the five boroughs? Use the power of philanthropy to serve not only the core, but the periphery too.

Design for the Disenfranchised

There will be countless opportunities to rethink our failing, midcentury public works in the near term. Look no further than our major thoroughfares and public housing. Some might be patched up incrementally, but we have reached a point at which deferred maintenance threatens the health and safety of many others.

We have an opportunity not just to rebuild better, with durable materials or resilient approaches, but to reconsider the communities that our infrastructure serves. Could we revamp our roadways not just for out-of-town traffic, but to accommodate a wide variety of bicycles, wheelchairs, scooters, paws and feet? Could we tear down elevated infrastructure and reunify once-divided communities? Could we ensure all subway station improvements also introduce new elevators to improve accessibility? Could we rebuild our public housing with direct input from residents, informing our approaches to new unit layouts, circulation, and shared spaces? ivermectin slow kill heartworm

Designers & engineers: consider how heroic infrastructure could serve the needs of common New Yorkers. And not just tomorrow, but in a century, too! Design for and with communities that have been historically abandoned, divided, or displaced by major urban projects.

To address other thorny issues – where overlapping political jurisdictions and empty budgets might preclude public action – city agencies are allowing new towers to fix old problems. A rundown subway station finds reinvestment through a skyscraper overhead, or air rights are invented to build and maintain an adjacent park.

Yet our edifice complex has adverse consequences. We are encouraging short-term solutions without confronting the root causes of our problems – all the while, adding new density and further burdening our public realm. Will cleaning up subway entrances and mezzanines do anything to address much-needed signaling upgrades? Are we unlocking new residential development while contributing little to desperate public housing? And will these new open spaces, developed and maintained by private actors, welcome as diverse an audience as our legacy public parks?

City planners and elected officials: reclaim the role that government can play in managing the public realm. Treat public housing, parks and transit like the critical infrastructure they are, and champion reform and reconstruction. Develop project budgets that can be creatively funded and timelines that are realistic. End the deferred maintenance mindset and argue for new operating, rather than capital dollars.

You don’t even have to do it alone! Tap into local pride and allow communities to restore a beloved landmark or subway station. Institute participatory budgeting and encourage residents to focus on less sexy but still vital community needs. When you can prove that you can sustain the public works we rely on, the voters of New York will trust you to build boldly once again.

A new culture of care will require not just the city’s political class, design leadership, and public-private partnerships to work together. The city’s voters also need to demand better.

To members of the public: don’t let another generation of elected officials duck our maintenance crises. Start electing visionary pothole politicians. Demand that city agencies reclaim their role in managing the public realm. And mobilize your neighbors to take action when your open spaces, transit options, and public housing are at risk.

Let’s get to work.

Daniel McPhee is Executive Director of the Urban Design Forum, an independent membership organization that convenes leaders in urban planning, design and development to debate the defining issues facing New York City and our urbanizing world. He works with the Board of Directors to present programming on community development, historic preservation, housing, open space, resiliency, and transportation. In recent years, he has led inquiries into the advent of new mobility technologies in New York City, the redevelopment of American public housing, and the mass urbanization of China. what worms does ivermectin kill Prior to his work with the Forum, he worked as a community planner in San Francisco.