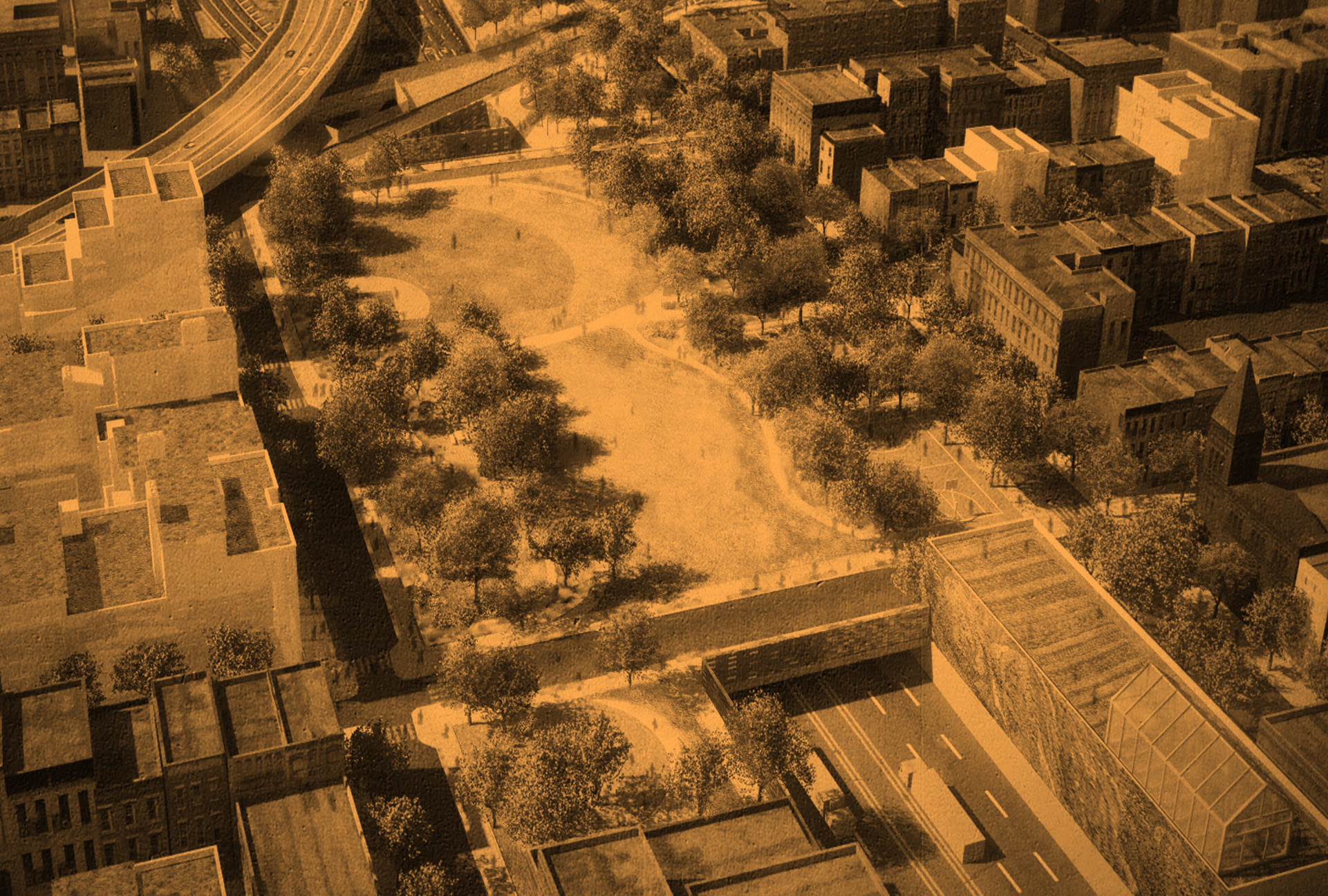 By capping two blocks of the Brooklyn Queens Expressway trench in Williamsburg, we can provide verdant open space for the neighborhood and build the better future the community envisions.

The Brooklyn Queens Expressway (BQE) was proposed in the mid-1930s to mitigate traffic congestion, facilitate industrial development, and strengthen the connection between the boroughs of New York City. Its construction left a trail of divided neighborhoods in its wake, the effects of which are still being felt today. In the predominantly Latino neighborhood of Los Sures in South Williamsburg, houses, stores, and churches were razed to make way for a six-lane highway trench—catalyzing a series of events that plagued the neighborhood for the next 60 years, leading to steep population losses and deteriorated property values.

Today, the bridges that cross the highway trench are in need of repair or replacement. Across the country many of the projects completed at the turn of the century and during the New Deal and Eisenhower eras are at the end of their lifespan. As James L. Oberstar, who served as chairman of the House Transportation and Infrastructure Committee, remarked: “The world-class surface transportation system passed on by previous generations of Americans has reached the age of obsolescence and now needs to be rebuilt.”

We’ve been working with local community groups to envision the BQGreen: a park created “out of thin air” by extending a concrete platform over a portion of the BQE. Bridging the section of the trench that runs between South 5th Street and South 3rd Street, the park would integrate Marcy Green and Rodney Park, two existing parks that currently are adjacent to the expressway. The BQGreen would increase park space in an under-served neighborhood, reconnect the communities on either side, and ameliorate the environmental impacts of living next to a six-lane highway.

Our proposal regenerates the BQE as an environmentally productive spine that introduces new recreation spaces, ecological strategies, and infrastructural improvements; enhancing the urban performance of the trench while transforming it into a true public amenity. We envision 3.5 acres of open space with a flower garden, a playground, a baseball diamond, barbecues, grassy and wooded areas, an indoor pool and a water play zone.

The idea of building a park over a highway is not new. It has been done in downtown Dallas and Seattle.1 Highways and other linear transportation infrastructure often occupy desirable real estate that can be strategically adapted to increase its value to the community, the city, and the overall ecology of the region. With support of City Councilwoman Diana Reyna, we are collaborating with the City and State agencies to pursue Federal community development funding to make the vision a reality for an under-served Hispanic community in South Williamsburg.

We need to look beyond electoral cycles to do what’s right for communities in the long run. We have the opportunity to demonstrate what can be achieved when local communities, city, state and federal governments and private companies work together toward a more equitable and sustainable future.

Susannah is the Principal of DLANDstudio, an award-winning multidisciplinary design firm. Their recent public projects include “A New Urban Ground” for the Museum of Modern Art’s Rising Currents Exhibit, the Gowanus Canal Sponge Park, the Brooklyn Bridge Pop-up Park, and the Raising Malawi Academy for Girls in Lilongwe Africa.

1 Though the NYC Department of Transportation has estimated the cost of constructing the BQGreen at $200 million per acre, Dallas’ Klyde Warren Park (a project similar in size and nature) was completed for $15 million per acre. Meanwhile, 20 acres of the Seattle waterfront is being rebuilt (including the dismantling of the elevated expressway and the building of an entirely new seawall) for $1.1 billion—the same cost estimated by NYCDOT for capping a mere 6 acres of the BQE trench.