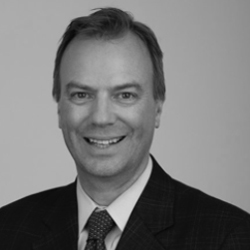 J. Devereaux Hawley manages real estate at Yale University.  He leads the strategy behind campus planning and pre-development along with Yale’s commercial property in New Haven, a total portfolio of over 17 million sf.   He also manages all operations for the campus, an organization of over 900 staff.  Previously, Dev was the Global Head of Capital Projects at Goldman Sachs, where he managed over 12 million sf and the interior development of Goldman Sachs Worldwide Headquarters in New York and new campuses in London and Bangaluru. He served as Director of Real Estate Development at The Walt Disney Company, where he helped develop the Hong Kong Disneyland Resort and Downtown Disney at the Disneyland Resort in Anaheim, CA. Dev holds Bachelor of Architecture and Master of Architecture II degrees. He currently also serves as Vice Chair of the Salvadori Center.